Berezne had its venerable scribes. It had its Maskilim and its dissenters, tax collectors and social activists, and even its own lunatics. The Jewish life was a peaceful river. Szuls were crowded with the Jews studying the Talmud among the yellowed books. 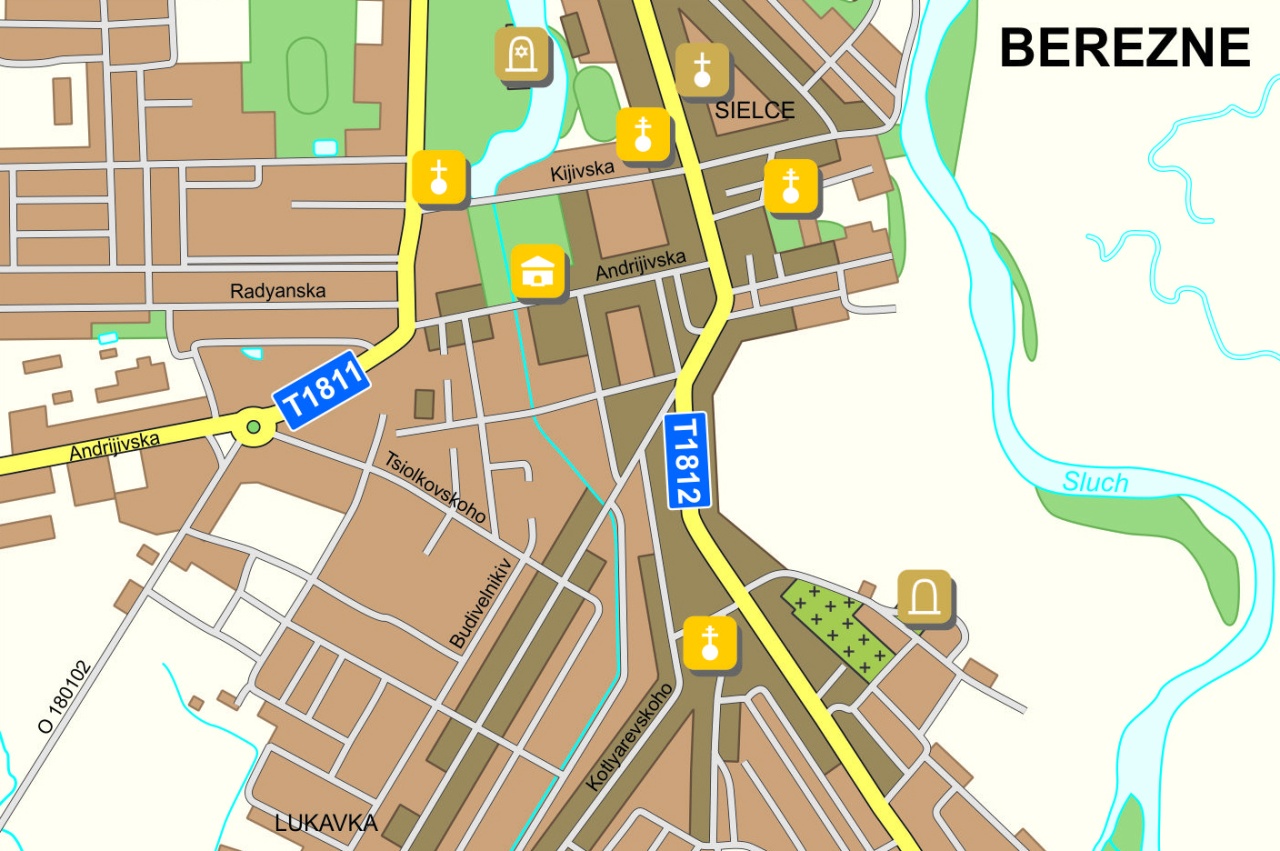 The city by the Horyn River

The first mention of the settlement dates from 1445, when the Grand Duke Švitrigaila gave it to Dmitr Sanguszko. The Berezne Raion is mentioned in documents from 1552. At that time, the city was the administrative centre. The town was called Jędrzejów, Bereżenka or Bereżne, and in the 19th century, the name Berezne was finally established.

The first mention of the Jewish community in Berezne dates back to the second half of the 17th century. In 1764, there were 48 Jewish houses; in 1784: 29; and in 1787: 37. The Berezne Qahal was founded in the 18th century. The Jewish community maintained synagogues, educational establishments, a cemetery and a shelter. There was also a society "Linat ha-Tzedek" (Heb. Charity Care).

At the beginning of the 20th century, the Jews accounted for 70% of the population of the city. According to data from 1927, Berezne had 2.9 thousand residents (excluding those, who owned plots of land), including Ukrainians: 1.3%, Jews: 93.0%, Poles: 4.3%, and Czechs: 0.6%. Before the war, the Jewish community played an important role in the life of the town. In 1928, out of 21 judges of the Berezne magistrate, 17 were of Jewish origin.

One of the noblest achievements of the Jews of Berezne was "Chevra Kadisha" [funeral society; Heb. a Holy Society]. Almost all the major members of the Jewish community were active in the funeral society. […] Once a year, all members of the society gathered and the Chairman’s – in my time, it was Icchok Peczenik (Josele) – gave a report on the annual activity. Then the prayer "El mole rachamim" [God, Full of Mercy] was recited and a new Board was elected, with the Rabbi as a Chairman. After the official part, there was a special supper, with a glass of vodka, fish, meat and compote. […] The society treated the deceased with utmost respect [Kavod HaMet]. It was important that a poor person was given a beautiful shroud as the last clothes. Showing respect to the dead was a great merit and a mitzvah [execution of the commandments] in all Jewish towns.

At the beginning of the 19th century, the local landowner (according to a legend, he was jealous of the town of Stolin, which developed thanks to its tzadik and his followers, the Hasidim, who continually flocked to it) invited the Hasidic Rabbi from Pinsk, Jehiel Michele Peczenik (d. 1849). Gave him land and helped build a house. He hoped that the religious activist would attract Jews to Berezne and this would speed up the economic development of the city. So it happened and the Peczenik family has ever since lived in Berezne and started a new Hasidic dynasty there.

Michele was a son of a Maggid [preacher], a disciple of the Maggid of Mezritch, a grandson of Rabbi David Haloja and son-in-law of the great Hasidic Rabbi and activist, Jehiel Michael, the Maggid from Zolochiv. Already in Stolin, Rabbi Michele sat day and night, studying the Torah in Beth Midrash, along with his son Itzik, son-in-law of Rabbi Aaron from Chernobyl. The Rabbi's wife worked in a shop and was the sole supporter for the family, so that her husband and son could study. Rabbi Itzyk was considered an illui [genius] and was very much respected and loved by the inhabitants of Chernobyl.

Berezne has a well preserved urban structure of a typical shtetl: single-storey wooden and brick houses with wooden porches. At the front of the houses, there were usually shops or workshops and potential clients could enter from the street. When children were married, new rooms were built adjacent to the house. The characteristic features of the houses in the town were high hipped roofs which visually occupied more than a half of the height of the building.

On a map from 1922, there is Shkolna Street, which was small and located in today's Bukhovycha Street. It ran perpendicularly from the central Komisarska Street (now Andriyivska Street) and further, to the then Lipki Street (now Kyivska Street). On this street, there were two synagogues and the house of rabbi.

On 11 Lystopada Street (now Nazaruka Street) in 1934, there was a pharmacy and many craft workshops. On 3 Maya Street (now Andriyivska Street) were the buildings of the club and the reading room. There was also a mill, belonging to one of the families (currently at this point, there is a music school).

At the market square, there were small shops run by Jews. In total, there were approx. 90 shops. Fairs played an important role in the commercial life of the town.

Berezne was built entirely of wood. Peasant huts had thatched roofs. One sparkle was enough to burn down the whole house. Fires were usually caused by mutual hostility of peasants. The Jewish houses had thatched roofs [?], so if a fire broke out, it quickly consumed the whole building. In the times of crisis, some craftsmen torched houses, to make money rebuilding them. That was the case of the fire which broke out in 1908, and both craftsmen and timber merchants made a good deal thanks to it. Flames consumed half of the town. 12 years later, another fire broke out.

The Great Synagogue was built in 1910, on a rectangular plan (9 m × 12 m). It had separate small rooms where carpenters, tailors and shoemakers prayed on weekdays. The main hall was used on Shabbat and holidays.

After the war, it housed a registry office. The building is located on Bukhovycha Street 3, but has been completely rebuilt and lost its former character.

In 1917, a Tarbut school was founded, where children were taught in Hebrew. The most famous teacher was Yakov Ajzman. There was also the Perec School with Yiddish as language of instruction.

On Pochtova Street, there was the Perec library and on Komisarska Street: a Zionist library. In both of them, in addition to literary works, you could read the current press. The most popular among the Jewish inhabitants of the city were the newspapers "Der Moment" (Yid. The Moment) and "Woliner Shtyme" (Yid. The Voice of Volhynia). There was also a theatre company. Performances took place in the "Link" club, situated on Komisarska Street (the building has been preserved to our times).

The Tarbut library included mostly books in Hebrew but also some in Yiddish. […] The librarians were: Gendler, Shmuel Tojbman of blessed memory and others, working completely selflessly.

The Perec library was located in the house of Ephraim Litwak on Pochtova Street. It was a large room, and along its walls were spacious shelves with books in Yiddish. There were works of classics Jewish authors but also masterpieces of world literature. Especially young people were keen on using this rich source of knowledge, as it was, in fact, one of the best-stocked libraries in the area. Librarians [Jankel] Pinchusovych and Fejga Liberzon helped the readers and knew each very well. Thanks to their knowledge, they raised a whole generation of readers. The Tarbut library could not compete with the wealth of the Perec library.

Berezne had two theatre groups: one at the Perec library and the second was Zionist. Both groups performed plays in Yiddish for each other or in cooperation. Some members showed considerable acting talents, so people of theatre came from outside of the city and together with the theatre companies they organized performances attracting crowds of inhabitants.

Jewish cemeteries were located in the north-west of the city, on the banks of the river. The old cemetery was on the eastern bank. The new one (founded in the 19th century) was on the western bank, next to the Catholic cemetery. According to the memories of witnesses, all matzevahs at this cemetery were wooden and only the central ohel of the famous rabbis was made of brick. The cemetery also became the place of collective burials of the Jews of Berezne shot during World War II. In the 1960s, a park and an artificial lake were constructed there. Cemeteries were flooded and destroyed.

In September 1939, the Red Army entered Berezne and in June 1941, the Germans, who set up a ghetto in the center of the city (now a market and a high school with a students' house). Over 3 thousand Jews were detained there. On 25 August 1942, all the inhabitants of the ghetto were brought outside of the city, forced to dig graves and killed by the Einsatzgruppen.

The residents of Berezne remember Doctor Lerner, who lived with his family in a building on the hospital property, on Pilsudzkiego Street (now Kyjivska). In August 1942, to avoid being put in the ghetto, he administered a lethal dose of morphine to his wife and little son, and later to himself. All three were buried in the garden next to the hospital.

Only a handful of people managed to escape from the ghetto. The fugitives hid in the forests until the arrival of the Red Army. To save their lives, they forged identity documents or got baptised; some joined the Soviet partisans.

The grave in the Dendropark

At the end of the 1960s, human remains were found dug out of the ground on the site of the shooting of the Jews of Berezne. It was established that it was done by cemetery hyenas looking for Jewish valuables. In the following years, the site was turned into a dendrological park, which helped stop the practice of digging up graves. At the end of the 1980s, a commemorative plaque was placed there. 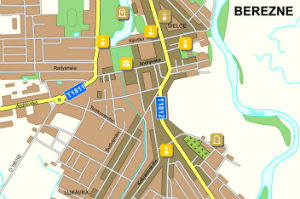