From Chortkiv, in "Bristol" directly from Berlin

Happened to pop in – to anyone

By the Seret River – of milk and honey 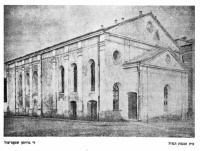 On the banks of the Seret River

The first written mention of Chortkiv dates from 1427. A council of the Ruthenian noblemen took place at that time, attended by, among others, nobleman Jan Prandota. He received lands on the banks of the Seret River from King Władysław II Jagiełło as a reward for heroism in the battle of Grunwald. Jan Prandota came from the village of Czartki in the Sieradz Voivodeship, so the nobleman named his new land Chortkiv, in memory of his homeland. Over time, his descendants changed their name to Czartkowski.

In 1522, King Sigismund I granted Chortkiv the city rights, and in the same year, Jerzy Czartkowski built a wooden castle there. SInce 1610, the voivode of Ruthenia and the Galician Castellan Stanislaw Golski began to build a stone castle in Chortkiv. After the death of Stanislaw Golski and his brother Jan, the castle and the town became the ownership of Stefan Potocki. Three times, in 1648, 1649 and 1655, Chortkiv together with the castle was captured by the Cossacks led by Bogdan Khmelnitsky. As a result of the Turkish expansion in 1672–1683, the town was incorporated into the Podolia Pashaluk. In 1683, the Royal Army drove the Turks out of Chortkiv.

The first Jews settled in Chortkiv probably soon after the foundation of the town. Rabbi Benjamin Selnik (1555–1620) of Podhorce wrote in the book Masa'at Beniamin that the Jews came here as traders and trade was one of their main activities. The Memorial Book of Chortkiv mentions a matzevah from 1616, located at the Chortkiv cemetery.

Up to the first half of the 17th century, Chortkiv was inhabited by approx. 50 Jewish families The collection of short stories and ethnographic material collected by A. Litwin (Samuel Hurwitz, 1862–1943) Yudishe neshomes (Yid. Jewish Souls, vol. 5, 1917) contains a rumor saying that in 1645, Jews were accused with an alliance with the Cossacks and were exiled from the city to the suburb, which since then was called "Wygnanka" (banishing) and later became one of the Jewish districts.

The Jewish community of the town was reborn at the end of the 17th century. The reborn Qahal in Chortkiv is associated with the names of famous gaos – outstanding experts in the Jewish law of Podolia: Rabbi Tzvi Hirsh Ha'Levi Horowitz (known as Rabbi Hirsheli), and Rabbi Segal of Lviv. In 1827, son of Rabbi Tzvi Hirsh, Shmuel Horowitz, was born and later became famous as Shmelke of Nikolsburg (now Mikulov in the Czech Republic) – one of the most prominent leaders of the Hasidim and the Chief Rabbi of Moravia. Another son of Tzvi Hirsh, Rabbi Pinkas, became the Chief Rabbi of Frankfurt am Main.

In 1722, Stefan Potocki officially gave the Jews the privilege of freedom of residence, construction, trade and craft in the city. The Jews were also required torenovate the castle and the roads, and, if necessary, come to their defense. In 1722, the Jewish families of Chortkiv were in possession of 110 homes, while Christians: 142. In the area of Wygnanka, the Jews had 36 houses.

Chortkiv had 3 Jewish cemeteries. All have partially survived to our days. On the site of the old cemetery (near Nezaleznosti Street), founded at the beginning of the 17th century, there is now the city hospital. Only one tomb, commemorating the tzadik David Moshe Friedman, erected a few years ago, can be found there.

The best preserved Jewish cemetery is located on the Wygnanka Hill, near Prowulok Kopykhynyeckoi Street, near the bridge over the Seret River, the bus station and a small new Orthodox church. It was probably established at the beginning of the 1920s. The cemetery has a few dozens matzevahs from the 1930s. On the edge of the cemetery, there is a small lapidary.

At the back of the Christian cemetery at Bandery, there is a Jewish epidemic cemetery, which was used in 1914–1926. A part of the wall and fragments of matzevahs can be found there.

The oldest preserved synagogue in Chortkiv was built in 1680. The building is located in the central part of the city, at the market square. It is now a part of the Medical College (Petrushevycha Street) and is used as a warehouse.

In 1905–1909, a new synagogue was built. It was established on the basis of a former Hasidic kloyz (1870), which was converted into a tzadik palace, with a large prayer hall. While preparing the project, a Viennese architect Hans Goldkremer was inspired by the residence of the Tzadik of Sadahora and expanded the kloyz with outbuildings and Oriental towers. In the Soviet times, and until 2013, the building housed the Station of Young Technicians.

Under a special Tolerant Edict issued in 1789 by the Austrian Emperor Joseph ІІ, the qualah administration was abolished in Galicia, a census was conducted and the Jews were given German names. In 1797, the Jews of Chortkiv owned already 121 homes, while the Christians: 232. The real liberalisation came in 1848, with the beginning of "the Spring of Nations". The Jews had the right to work in the local government and courts, pursue education and practice the profession of a doctor or a lawyer.

In 1870, Rabbi David Moshe Friedman (1827–1904), son of Israel Friedman Ruzhiner, came to Chortkiv, and is best remembered as the Tzadik of Sadohora (currently on the outskirts of Chernivtsi). Eventually, the town became the residence of the Chortkiv branch of the Ruzhin-Sadigora Hasidic dynasty.

In the Hasidic tradition, David Moshe Friedman is remembered as a humble and good-natured man. Although he might have lacked his father's organizational talent, he soon gathered one of the largest Hasidic groups in Galicia. The Chortkover Rabbi led an ascetic life completely devoted to prayer. He could spend days without sleep, food or drink, not showing any signs of weakness. He shunned form worldly affairs and distanced himself from problems of the community but still enjoyed the authority among its members. His older brother, Avraam Yaakov (1820–1883) said about him: "I have never seen such a saintly Jew". During his prayers, Rabbi David Moshe experienced ecstatic states; he used to say: "...a fire burns within a tzadik's body, which sometimes escapes without. Like water escapes an overfilled vessel, the just one expresses himself by the excess of holiness so that people see this holiness and believe in him." His son Israel (1854–1934) continued the tradition. The third Tzadik of Chortkiv, Nachum Mordechai, died in Israel in 1946, leaving behind many students.

"Rabbi from Chortkiv" had a great adversary: Rabbi Meir Shapir (1887–1933), the founder of the famous yeshiva Chachmei Lublin (Heb. Yeshiva of The Wise of Lublin).

In the 18th century, an entrepreneur named Lefert came to Galicia from France. He descended from a family of Sephardic Jews, was a man of German culture, a supporter of the Haskalah and considered himself a German, but the Austrian authorities gave him the name Franzos, after the country he came from. His son Heinrich worked in Chortkiv as a doctor and participated in the revolutionary events of 1848. The son of Heinrich, Karl Emil Franzos (1848–1904) was an outstanding writer and translator of German literature. Karl Emil went to a Dominican school and at the same time took private lessons in Hebrew. He also spoke fluent Polish and Ukrainian. After his father's death in 1858, he moved with his mother to Chernivtsi, studied at the Faculty of Law at the University of Vienna and the University of Graz. Many of his works were devoted to the life of the Ukrainian peasants. He became famous after the publication of notes from a trip to Russia, Central Europe and Turkey. K.E. Franzos is the author of the term "Halb-Asien" (Ger. half-Asia), in referrence to Galicia as part of the Austrian Empire due to its poverty, backwardness and "neglected provincialism." In the collection of short stories Die Juden von Barnow (Ger. The Jews of Baranov), the fictional provincial town of Baranov resembles the Jewish Chortkiv – the city of his childhood.

Painter Sasha Blonder (1909–1949) left Chortkiv for France in his youth. He was born in a family of an impoverished textile merchant. His made his first steps in painting in Chortkiv, where he became the leader of a local group of artists. His paintings are full of references to his hometown. Blonder's works contain themes of local synagogues or quiet courtyards and streets of the old Chortkiv. In 1930, his parents managed to send the talented young man to Paris to study architecture. He was under a strong influence of Chagall, Soutine, Modigliani, Bonnard and other contemporary masters of the avant-garde painting. He quit architecture studies in 1932–1934; then he studied painting at the Academy of Fine Arts in Krakow. There, he became one of the founders of the artistic groups "Żywi" ("The Alive") and "The Krakow Group". He probably visited his father and brother in Chortkiv for the last time in 1935. In 1937, he moved to Paris. During the Nazi occupation in France, Blonder was an active participant in the resistance movement. In 1942, he began to sign his works with the artistic pseudonym "André Blondel".

In 1939, among the 12 thousand inhabitants of Chortkiv, there were approx. 5 thousand Jews. In September 1939, many refugees from the west of Poland came to the town. Soon, Chortkiv was occupied by the Red Army. On 6 July 1941, the German occupation began, and as in many other places, the pogrom occurred. The Germans set up the Judenrat, but after a month, the members of the Judenrat, together with several hundred representatives of the Jewish intelligence, were shot in the Black Forest near the city. From July to October 1941, over 650 Jews were murdered in Chortkiv. In April 1942, a ghetto was created, which included the streets: Rzeznicka, Skladova, Lazienna, Shkolna, and Podolska. On 26–27 August 1942, the first "Aktion" took place: 2,120 people were sent to the extermination camp in Belzec. Together with the Jews of Chortkiv, there were also the Jews from Yahylnytsia and Tovste. 350 people were killed. On 5 October, the next deportation took place – 500 Jews from Chortkiv were put on the mass transport together with people from Ternopil, Tovste, Yahylnytsia, Monastyryska and Buchach. Also the Jewish policemen from Chortkiv were deported. The transport, like the previous one, was sent to Belzec. Along the way, it stopped in Lviv, where the Germans made a selection. Approx. 1 thousand people (the full transport had 6 thousand Jews) were sent to the labour camp at Janovska, and their place in the train was taken by the same number of Jews considered by the SS unable to work. In December 1942, in the building of the Talmud-Torah in Chortkiv, the Germans established a labour camp for more than 500 local craftsmen. Although it was cold and the workers suffered hunger, they were protected against deportation. The ghetto was eventually liquidated on 17 June 1943. Approx. 2 thousand people were shot. The liquidation of the ghetto met with resistance. A group of Jews hidden in shelters used weapons against the Germans. All were killed. On 23 June 1943, the labour camp in the building of the Talmud-Torah was closed. The Nazis carried out a selection. One group, considered unable to work, was shot in the Black Forest near Chortkiv. Others, like many ofther Jews of Chortkiv, were sent to the nearby labour camps. Dozens of them survived there until the coming of the Red Army in June 1944. Some were saved by Christian families.

In 2005, at the site of the mass grave in the Black Forest (near the road leading to Kopychyntsi) a monument was erected.