Indura has lost its Jewish flavour…

The town’s name is connected with the Balts, who called the local river Indrupis, which meant “reedy” – indre meaning “reed”. Thus, a melodious word was coined: Indura. In 1413, Indura was mentioned in the resolution of the Grodno Sejm on the Union of the Grand Duchy of Lithuania with the Crown of Poland. Under that resolution, Ashmyany, Slonim, Vawkavysk, Indura, and Grodno – all of them referred to in the document as towns – were incorporated into the Troki (Trakai) Palatinate.

In the 16th–17th centuries, the town of Indura belonged to the noble families of Kiszka, Radziwiłł, Pac, Wałowicz, Isakowski, and Mlecznik, and in the 18th century – to the Ogiński, Sałaguba, and Masalski families. During the Great Northern War (1700–1721), Swedish General Meyerfeld defeated the Russian troops in a battle near Indura.

With the Third Partition of Poland (1795), Indura fell within the borders of the Russian Empire. The town was situated on the Brzestowski and Kozłowski family estates. In 1915, it came under German occupation. In 1919–1920, it was seized by the Red Army and then by Polish forces. In 1921, under the Peace Treaty of Riga, it was incorporated into the Second Polish Republic.

The Jews of Indura

The first mention of Jews in Indura dates back to the 16th century. The Indura Jewish community was administrated by the kahal of Grodno. In 1720, during an annual fair, the elders of Lithuanian kahals (the Lithuanian Vaad) convened in Indura and drew up a list of Jewish community taxes for 1721. According to the 1766 census, Indura had 505 Jewish residents.

In the second half of the 18th century, Indura was the second largest centre of Hasidism in north-eastern Poland after Pinsk. Although it was a small town, it had its own yeshiva. One of the figures in the local community leadership was Haim Haykel ben Shmuel, also known as Haim Amdurski, a disciple of the Maggid (Dov-Ber) of Mezherich and Aaron of Karlin. Haykel Amdurski was a tzadik in Indura in the 1770s and 1780s. At Haim Haykel’s court, there was a custom of confessing to the tzadik or to one another. As long as Haykel lived in Indura, Hasidim from all over Lithuania would come to see him. Other tzadikim of his generation – such as Pinchas of Korets and Boruch of Medzhibozh – respected him for his deep prayer and asceticism. For a long time, the manuscript of his book, Haim ve-hesed, was in possession of the admors of the Karlin Hasidic dynasty; it was printed for the first time in 1891 in Warsaw.

When Haim Haykel ben Shmuel died in 1787, his son Shmuel (d. after 1798) took over as head of the community, and Hasidism ceased to be a presence in Indura.

Rabbi Aaron travelled through all of Russia, from one Jewish city to the next, in search of young people worth bringing to his teacher, the Great Maggid, as disciples, so that through them the hasidic teachings might spread through the world. Once he came to the city of Amdur. Now he had heard that, beyond the town, in a lonely wood, lived a devout and learned man, Rabbi Hayke, who kept aloof from the world and from men, and mortified his flesh. In order to bring him to the town, Rabbi Aaron preached in the House of Prayer a number of times, and his words had a powerful effect, but it took a long time for the hermit to hear of it. When the hour for the next sermon drew near, something drove him to the House of Prayer. When Rabbi Aaron heard he had come, he did not preach his sermon, but said only these words: “If a man does not grow better, he grows worse.” Like a poison which rouses the very core of life against itself, these words bit into the mind of the ascetic. He ran to the rabbi and begged him to help him out of the maze of error in which he had lost his way. “Only my teacher, the maggid of Mezherich can do that,” said Rabbi Aaron.“Then give me a letter to him,” said the man, “so that he may know who I am.” His request was granted, and he started out on his journey confident that before he spoke freely to the maggid, the famous teacher would know that he had before him one of the great men of his generation.

The maggid opened the letter and – obviously with deliberate intent – read it aloud. It said that the man who was delivering it did not have a particle of sound goodness in him. Rabbi Hayke burst into tears. “Now, now,” said the maggid. –“Does what that Litvak (a non-Hasidic Jew) writes really matter so much to you?” – “Is it true or isn’t it?” asked the other. – “Well,” said the maggid, if the Litvak says so, it is, very probably, true.” – “Then heal me, rabbi!” the ascetic begged him.

For a whole year, the maggid worked over him and healed him. Later, Rabbi Hayke became one of the great men of his generation.

The collection of the National Historical Archive of Belarus in Grodno contains documents connected with the life of Indura’s Jews, reflecting the town life in the 19th century. One of these documents describes a famine experienced by the Jewish population in 1823–1825. A county doctor’s report reads: “having visited all the houses together with the chief of county police, I found only eight ill Jews, suffering from undernourishment. If the rumours are to be trusted, approximately 100 Jews died. They have no money for medicines, in their homes [there are] impurities and the situation [is] desperate. The kahal has no resources.”

The shtetl in figures

In 1847, the Jewish community of Indura numbered 1,220 people. Data from the National Historical Archive of Belarus in Grodno reveal that in September 1852, a fire in the town consumed 54 Jewish and 15 Christian houses with outbuildings as well as all shops and their goods. About 150 families were left homeless.

In 1881, there were 237 Jewish and four Christian houses in Indura. The 1897 census reports 314 houses, a Catholic church, an Orthodox church, a synagogue, four Jewish prayer houses, a parish school, a post office, a first-aid station, a brewery, two distilleries, 16 workshops, a limestone processing plant, eight inns, market fairs on Sundays, and 2,674 residents, 2,194 of whom were Jewish.

In 1910–1911, Shmuel Wolf Naufakh opened a bookshop in Indura. He obtained a licence to deal in “books allowed by censorship, only in Russian.” He requested permission to deal also in censored Jewish and German books, but the request was rejected after a report by the local chief of police stated: “Naufakh holds the post of the elder of the Indura Munucipal Board, and his duties do not always allow him to work at the bookshop personally. Usually, a member of his family is in charge of sales. But neither the family nor Naufakh himself have any idea of marketing books, and yet, they are eager to take up anything, as Jews typically are. There is no demand for Jewish or German books, and demand for the Russian ones is low.”

The synagogue in Indura was built in 1885 on the site of a previous one, which probably had been wooden. It reflects an austere monumental-classical style of synagogue architecture, with only a minimum of decorative elements. The synagogue was built of brick and originally was plastered. After the war, it was used by the local kolkhoz for farm-related purposes. At present, it stands abandoned, and its condition is gradually deteriorating.

Indura’s Jewish cemetery is located in the southwestern part of the town, in Gagarin Street. It occupies an irregular L-shaped plot, including an oblong hill about five metres high. Several hundred tombstones survive, most of them made of granite. The oldest surviving tombstones date back to the 18th century. Along Gagarin St., the cemetery is partly fenced by a steel barrier with metal elements incorporating the Star of David. The area of the cemetery is now used for grazing.

In 1939, Indura fell within the borders of the Beloriussian Soviet Socialist Republic. In June 1941, it was seized by German troops. In late August and early September 1941, a ghetto was established. On November 2, 1942, the inmates of the ghetto were deported to the Kolbassino transit camp, and then sent to the Treblinka and Auschwitz death camps. However, according to the data cited by Marat Botvinnik (Monuments to the Genocide of the Jews of Belorussia, Minsk 2000), on November 2, 1942, Germans stationed in Indura aided by policemen shot dead 2,800 people, most of whom were women and children.

Indura was liberated on July 14, 1944. After the war, there was no Jewish community. On December 29, 1949, the town lost its municipal rights and was downgraded to a village. In 2007, it was granted the status of an agrotown. The synagogue building still dominates the local landscape and, though in deteriorating condition, is one of the best-preserved Jewish heritage sites in Belarus. On Leningradskia Street, a mikveh building from 1883 has survived and now functions as a public bath. A source of information about the town Jewish life is the memorial book entitled Amdur, mein gebijren shtetl (Yid.: Indura, My Home Town), published in Buenos Aires in 1973. The book contains an introduction by Abraham Zak (1891–1980), a Yiddish-language poet and writer born in Indura.

Grodno (26 km): a choral synagogue (17th c.); a Jewish cemetery with approx. 2,000 matzevot and the tombs of Rabbis Shimon Shkop and Alexander Zyskind (17th c.); the buildings of the former Tarbut school; the Jewish community building; a hospital; and a yeshiva; a rich collection of Judaica at the Grodno Museum of the History of Religion; the Castle Hill with the Old Castle (11th–19th c.); the New Castle; the Orthodox Church of Sts. Boris and Gleb (12th c.); monasteries: Bernardine, Franciscan, and Jesuit, as well as convents: Bridgettine and Basilian; a monument to Eliza Orzeszkowa, a famous female Polish 19th-century writer who wrote favourably about Jews, and a museum devoted to her.

Svislach (56 km): a former synagogue, currently a cinema (19th c.); a Jewish cemetery; the building of a former Jewish inn, currently a museum; the Tyszkiewicz family manorial complex and parks (early 20th c.); the Orthodox Church of the Exaltation of the Holy Cross (1884); the gymnasium (secondary school) building (1802–1803); the railway station (19th/20th c.). 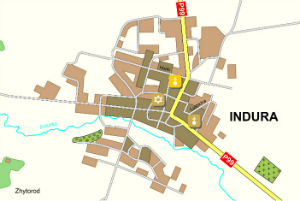