In Luboml, a town in the north-west part of Volhynia, the world's first postage stamp with an inscription in the Hebrew alphabet was issued. In the 1920s, it was the city with the highest percentage of Jews among the residents in the whole of the Second Republic of Poland.

The first mention of Luboml comes from the 13th century, although these lands were inhabited even earlier. The town began to develop rapidly after the Mongols stopped their raids. Over many centuries, the Jewish community played a special role in the development of the economy and culture of this city. Rafael Mahler, in his fundamental work Jidn in amolikn Polin in licht fun cifern (Yid. Jews in Old Poland in Numbers, 1958), states that in the 14th century in Poland, Polesie, Belarus (Lithuania) and in the Chełm land, there was already a small Jewish community and gives an example of Luboml from the years 1370–1382. During the period of the Commonwealth, Luboml was the seat of the starost of the Chełm Land and, according to the Jewish administrative division, the seat of the Belz-Chełm Raion. The Jewish community in Luboml was considered to be one of the oldest in Poland.

The Jewish name of the town

The Jewish residents of this Volhynian settlement called their little homeland "Libivne" in Yiddish. In Hebrew texts, you can also find the name Libavne or Libavna. Due to similar sounding names, Jews (even the educated rabbis) often mistook Luboml for Lublin.

In 1510 (according to other sources – in 1521), the Jewish community built a synagogue in Luboml: one of the most beautiful Jewish brick temples on the territory of the Commonwealth. The Great Synagogue was located near to the defense shaft within the city limits, in the south west corner of the market square.

The synagogue was built in the Renaissance style and was fortified. The main building had the shape of a cube; the adjacent room for women was lower. Each of these linked parts of the building had an attic decorading the edges of the roof. Unique engravings on the façade of the buildings enhanced its grandeur. The entrance by the main lobby (Heb. pulish) was decorated with 2 inscriptions, quotes from the Bible; at the bottom: "This place is fearsome! This has to be the house of God! This is the gate of heaven!"(Genesis 28: 17, CJB) and at the top: "In the house of God we walked with the crowd" (Ps 55: 15(14), CJB). "How lovely are your tents, Ya‘akov; your encampments, Isra’el!" (Numbers 24:5, CJB): this inscription was engraved on the arches of three big windows from the south side of the Great Synagogue.

The name of the architect of the original building remains unknown. Exterior walls of the synagogue were surrounded by a defensive gallery with observation holes.

The ghosts of the Great Synagogue

In Sefer Luboml (Heb. The Memorial Book of Luboml), there was a legend that in the night, souls of the dead come to the Great Synagogue to pray. It was very popular among the Jewish population of Eastern Europe. Sholem Aleichem, in his novel From the Fair wrote: "And a voice, dull and muffled, comes from the cold synagogue. Strange, plaintive tones. These are the dead, praying. Every Saturday night, the dead pray in the cold synagogue. They have minyan. Who would not know about it?"

According to The Memorial Book, during long autumn nights, when the wind was whistling and dogs were howling, kids from Luboml with bated breath listened to terrifying ghost stories told by their grandparents.

In memoirs of Yisroel Garmi (Grimatlicht), we learn that near the Great Synagogue and Beth Midrash, there were separate kloyz for Hasidic groups and for craftsmen. Hasidic shtiebels in the city were named: Turzyski, Ruzynski, Kocki, Radzynski, and Stepanski. The one of the Turiisk Hasidim was located on the right side of Beth Midrash.

One of the most famous rabbis of Luboml was Hersh, who served since 1556 until the 1570s. Since then, for nearly a century, the rabbis from Luboml were among the most famous in Poland. One of them was Abraham Polak, author of numerous books and teacher. At the end of the 16th century, another well-known rabbi was Moshe Mes. His books printed in 1591 in Krakow, were reprinted in 1720 in Frankfurt am Main, in 1958 in London, and in 1964 in Brooklyn.

In the Jewish school in Luboml studied Seweryn Lubomelczyk (born in Luboml, 1532–1612), who converted to Catholicism as an adult and became famous in Europe as a prominent theologian and orator. The Pope and Polish kings entrusted him with important matters. Seweryn Lubomelczyk wrote many theological works and enjoyed authority among the Dominicans.

Frank (Ephraim) Rosenblatt (1884–1927), born in Luboml: literary critic, journalist, doctor of philosophy. He received traditional religious education. Initially, he supported Zionism and then joined the Bund movement. In 1903, he was arrested and after his release went to the United States. In 1910, he graduated from Columbia University in New York. He worked as an expert in economics for state institutions, and secretary general of Arbeter Ring (Yid. The Workmen's Circle): a leftist Jewish non-profit organization dealing with the protection of the Yiddish culture, promoting the rights of workers and the dissemination of the idea of social equality. He began literary activity in 1903. He first wrote in Russian, then in Yiddish. He published poems in various journals, including "Zukunft" (Yid. The Future). There, he published articles on socio-political, economic issues and literature. He wrote papers devoted to the works of Sholem Aleichem, Awrom Rejzen, I. I.-M. Weisenberg, M. Winczewski, M. Rosenfeld and others, as well as the works of Russian writers. Rosenblatt is one of the leading critics of the American literature in Yiddish of the beginning of the 20th century.

According to the records in fiscal books of 1564, in Luboml there were 8 merchants, 26 associated craftsmen, 3 Orthodox churches, a monastery and a synagogue.

In 1564, the Jewish community paid a tax of 150 florins, i.e. 1 florin per person. Jews worked in crafts, leased lands, traded with Lviv, Kiev, Brest, Przemysl, Lublin and Warsaw. The Bug River was used to transport goods to Gdansk and other cities. These were mainly wood, potash, wax, honey, salt, saffron, jewelery and others. The minutes of the Council of Four Lands of 1667 contain a statement of tax rates per year. Larger towns, including Luboml, are mentioned separately. The Jewish community was taxed in the amount of 8,100 guilders.

During World War I, the city was occupied by the Austrians. While a large part of the inhabitants had been evacuated to Russia, most Jews remained in the city. David Wejtsfrucht-London, brother of the local Rabbi Aryeh-Leib London, was elected the Mayor of Luboml.

In 1918, still during the Austro-Hungarian occupation, the local magistrate issued a series of postage stamps with views of Luboml and inscriptions in four languages: Polish, Ukrainian, German and Hebrew. For the first time, letters of the Hebrew alphabet appeared on postage stamps. Among the depicted views in this series, there is also the synagogue and the market square.

In 1921, Luboml was inhabited by 3,328 people, including 3,141 Jews. In 1931, Jews accounted for 91.3% of the population of the city. In the interwar period, the Jewish cultural and social institutions flourished. There were many cultural organizations, youth and sports clubs; also the Zionist movement developed.

Many Jewish companies were family businesses, e.g. a shoemaker's workshop of the Milstein brothers. There was a well-known factory of vodka and liquors owned by Rejzman and Kopelzon. Many young people left and went abroad to the USA, Palestine, Canada and Argentina.

Some Jewish craftsmen belonged to the underground Communist Party of Western Ukraine and were persecuted by the authorities. Although the authorities did not allow Ukrainians and Jews to hold managerial posts, they were elected to the magistrate and the district council.

In September 1939, the Germans were the first to enter Luboml but withdrew after a few days. Some residents with communist sympathies built a gate to welcome the Red Army. At the sight of it, a retreating Polish division made a series of executions. Between October 1939 and June 1941, the Soviet authorities ruled the city. All social activities independent of the official Soviet organization were banned, and the old Jewish cemetery destroyed. On 22 June 1941, the German army returned to Luboml. In December 1942, the Nazis organized a ghetto covering the area of just a few streets. In early October 1942, the Germans shot all Jewish inhabitants (almost 5 thousand people) near a brick factory in the Borki forest.

The synagogue functioned until the beginning of the Nazi occupation and survived in good condition. In the first months of the occupation, the German authorities forced the Jews to bring all ancient scrolls and books from the synagogue, and burned them. Then, they made a hole in the wall of the synagogue to be able to get inside with a truck with clothes of the shot victims and items stole from Jewish homes; they used the synagogue for sorting and packing the stolen goods. However, the building survived the German occupation and was demolished only after the reinstitution of the Soviet rule in 1944. 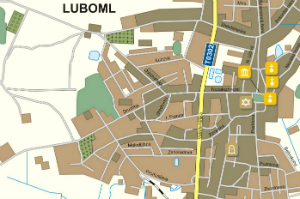