A stroll through Siemiatycze

I am glad that it's me that you've decided to go on a stroll through Siemiatycze with. Coincidentally, I am a tour guide with the IT Point in Siemiatycze, and I've been documenting and promoting the history of Jews from Siemiatycze for the past several years. In short, you are lucky to have come across me, and it's great that today's Thursday. If you're ready for the tour, let's go!

To avoid getting hungry during the trip, I recommend going to the PSS shop on the main square of the town, where we can buy a Siemiatycze matzo. Yes, indeed, it is a kind of bread available here in Siemiatycze. Did you know that the sole surviving matzo-producing machine comes from Siemiatycze and is currently held in the Jewish Historical Institute in Warsaw?

Let's have a quick rundown of Jewish Siemiatycze history. The first Jews came to Siemiatycze from Lithuania in 1582, brought here by the erstwhile owner of the town, Katarzyna of house Tęczyński in order to reinvigorate the town economically. In 1667, there was already a Jewish gmina (commune, municipality) here. The preserved synagogue dates back to 1797 and is a gift from Duchess Anna Jabłonowska of house Sapieha in exchange for tracing the Pałacowa street through the kirkut (Jewish cemetery). During the interwar period Jews had four other synagogues in Siemiatycze. In 1939, there were 4303 Jews there; by the autumn of 1939 this number had grown to over 7000 people – refugees from western Poland. Between 07.1942 and 10.11.1942 Germans established a ghetto in Siemiatycze. It functioned for a little over three months. Over seven thousand Jews were imprisoned there – inhabitants of Siemiatycze and other towns. The Jewish community of Siemiatycze died in Treblinka in November 1942.

Let's begin with the synagogue. Yes, I know, it's huge, but first I want to draw your attention to a smaller element: the cornerstone of the synagogue. Looking at this stone, I always think of the nameless builders of the prayer house in Siemiatycze, but also of another stone, with "Siemiatycze" carved into it, which is located in the extermination camp in Treblinka among hundreds of other stones. These two stones are like the beginning and the end.

What about the synagogue itself?  It survived the January Uprising of 1863 and two wars – probably because it didn't really look like a place of worship, as on the outside it's a one-level, square building covered with a hip roof – I know, it's nothing architecturally fancy, but that is why it is still here, still stands, preserved. Inside, the synagogue was beautiful, as it was designed with a truly baroque splendour – its walls painted in animal and floral motifs. The stone floor was arranged in decorative designs. The synagogue had a lot of wooden elements, among others – the entire eastern wall with the Aron Kodesh, where scrolls of Torah were kept – it is the scene of the culture centre today and the cinema screen hangs here. To imagine what the wooden elements looked like, it's best to visit the St. Peter and Paul Eastern Orthodox church where the iconostasis represents similar techniques and sculptural style. The full furnishings of the synagogue did not survive, although the Torah itself, the first five books of the Bible, did – it can be seen in the Diocese Museum in Drohiczyn – 20 kilometres from Siemiatycze. By the stairs of the synagogue, we enter babiniec (the women's annex), where women were allowed to pray. Up there, in one of the rooms there are paintings of Józef Charyton (1909–1975), a self-educated painter from Siemiatycze who, after the war, created a series of paintings and drawings documenting the sites of extermination, and the daily life of the Jewish community before World War II. He painted almost 500 of them, with various techniques, including paintings as big as several square meters – a few are kept in the Siemiatycze synagogue. Inside and outside of the synagogue there are tablets commemorating the Jewish community – what they say is worth reading. In the summer, the synagogue is pleasantly cool.

Now we leave the synagogue. Nearby, there is a former Talmudic house from 1893. What is interesting, the building has always served educational purposes – it held a kindergarten, a library, and now holds a trade school.

We are heading towards the main square of the town now – named after John Paul II, and commonly called a "roundabout". The town hall used to be here, until it was bombed by Germans in 1939. Siemiatycze received city rights from king Sigismund II Augustus I in 1542. At that time, the city was always allowed to hold fairs and markets on Thursdays; this 500-year-old tradition has survived to this day. It was around the city hall, on the square, that since 1542 a 'Thursday market' had been held. It was technically a market, but due to its location had been dubbed otherwise. Mostly Jews were in the trade, but there were also villagers from the region.. To this day, the  inhabitants of Siemiatycze say "I'm going to the square" – the word market is not used. On the roundabout it is good to come by the local editorial office of Głos Siemiatycz [The Voice of Siemiatycze], and the Tourist Information Point – in both of these places one can buy postcards from Siemiatycze, write a few words to one's family or friends, beginning or ending with "it's beautiful in here!" And send them, of course.

From the city square, we continue down the Sezamowa and Grodzieńska streets towards the kirkut. Along the way, we pass some cool wooden houses – in the summer, common hollyhocks grow here.

Kirkut at Polna street was founded in the 18th century. The necropolis is surrounded by a wall, with a unique gate of eternal memory made of the so-called Tzar's red brick, featuring 4 brick Stars of David and tablets commemorating the murdered. Beyond the gate, from a dozen or so preserved gravestones a lapidarium commemorating Siemiatycze was built. Apart from the lapidarium, none of the several hundred gravestones survived. The cemetery is overgrown by the forest. One can freely say – the number of the tees growing in the kirkut now, corresponds to the number of matzevot in the past. On Thursdays, the surroundings of kirkut are full of people – that's because of the Thursday market. It's worth coming by – to buy something or not, one can listen to the beautiful accent of Podlasie, with several variations to boot. So now if we've bought, listened to and glimpsed the goods of the Siemiatycze market, please take notice of a small (dilapidated, it's true) house fully built out of stove tiles, just at the cemetery wall.

From the kirkut we are but a few steps away from being able to see the ruins of the Dajcz Tive Factory from 1906, the biggest of Siemiatycze tile factories and the biggest in the country (several hectares, underground conveyor belt, 5 levels). It survived the war, and, after being nationalised, produced tiles until 1990. A beautiful ruin which evokes the images of the massive scale tile production as well as of what these buildings could hold today. They survived almost a hundred years just to be destroyed fairly recently. Regrettable. The tile capital and a clay Eldorado were the names Siemiatycze was called before the war thanks to Jewish tile factories. It was Siemiatycze Jews who brought so many developments into the  tile and ceramics industries. During the inter-war period, there were over 15 tile factories in Siemiatycze and the surrounding grounds. Their owners were, among others: Belkies, Radzyński, Gorfajn, Dajcz, Maliniak, Szyszko, and Małach. The first tile factory in Siemiatycze started operating in 1890 and over a hundred years circa 30 other tile factories could have been listed in the city and surrounding grounds – nowadays there are but 3 active ones.

It is time to say goodbye soon, dear strollers, we've walked several Siemiatycze streets together, we dived into its history – and saw what was worth showing. To end our walk well, I recommend getting some tasty ice cream nearby the bus station. Before parting with Siemiatycze, let's feel like we're in Egypt and go see three Sphinxes – two by the starostwo (eldership) building and one by liceum (high school). It's also worth coming by the Mahomet river, the name of which dates back to the first half of the 12th century and the Tatar incursions. With this baggage of knowledge and images we saw together, I can say goodbye to you with a clear conscience :) See you soon. 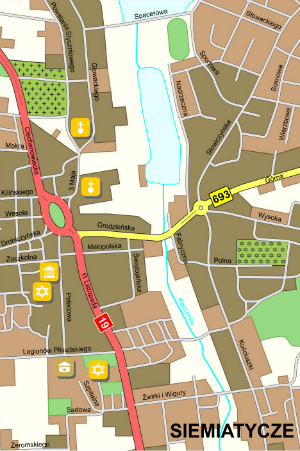