A story by Tomasz Blatt

On Saturday, or more accurately, on Friday even, a Jewish holiday started. The shops would be closed already. The mother made a Sabbath food on Friday, there was chala, candles, she prayed by those candles, and we sometimes even had guests. There was Stasiecki, the police chief. He came to us for a Jew–prepared fish. I recall from my childhood that they'd come, put their rifles in a corner. I would start playing around those rifles, but they shouted at me to leave those alone, I can remember. They told me that when I was a child, and a mayor came to us one Friday, for some fish, there was always a bottle of wine at hand, and father had me on his lap, there was a glass of wine, and I – I still have a sweet tooth – took it upon myself to drink it all. As a child. I don't really remember it, but father said that he suddenly saw me all limp, so he called the doctor, who said that I just got drunk. On Saturday evening, when the Sabbath was over, I remember there was a tradition for all of us regarding going out to the main street and taking a walk – from one end to the other – a nice stroll. All families. Wearing their best clothes, celebrating the end of Sabbath. I never went with them, but mum always took my younger brother – took him by the hand, walked with him there and back again. It was a tradition.

I liked my mother's fish [Jew–prepared]. As for the sweets, I liked the so–called "hamantash" – triangular cookies with a poppy seed filling. It was made on the Purim holiday, I liked it. And I liked having matzo to chew. The matzo was made just like that, you gave some flour to a baker, and he made you a matzo when you paid him. This matzo was thick, I remember, and they made holes with a special knife. But soon before the war the matzo started being machine–made, thin, smooth. I liked it very much. I also liked pancakes with onion and poppy seeds, such thin pancakes.

My first house, where I was born, was a house – or "jerysze" in Jewish – which my great-grandfather had built, then he had children, it was a large house, so the apartments were divided among children, then among grandchildren and great-grandchildren. In the end all the family members lived in the same house, and even some other people had their rooms there. Yeah, we were considered rich, because few people had a constant source of income. My father as a legionnaire received a license for wine and vodka production, so we had a regular income. And so were were the rich ones. I actually remember our house. Initially, I recall, we didn't even have actual floor. There was just a threshing floor. I remember the first electric lamp. Until that time we had a kerosene lamp, then, I remember, all of us sat at the table in the evening and for the first time, a light-bulb hung from the ceiling, with a tin cover, and you had to twist, there were a manner of valves, you twisted them, and the light would start shining, you didn't need candles, nor kerosene lamps, not anymore. I remember this change.

In Izbica lived mostly Jews [over 90% of total population]. There were also Poles, but no Ukrainians. Izbica was a poor town. Orthodox Jews were a majority – complete with their clothing and their speech. There was one synagogue in Izbica, there were the so–called beth midrashes, houses of prayer, they were small, but quite many of them. The synagogue was just one, however. People would donate, and it supported itself out of it. What did it look like? It was a large building. It was deconstructed after the war, not the Germans. It was rectangular, with a single story. The upper level was for women, because they have to sit separately from men during prayers. There was something painted on the ceiling, but not animals, because those were prohibited from being depicted in the synagogue. At the western wall there was an altar, I recall, they kept the Torah there. In the centre there was a so–called bema, where they read the Torah, it was like a little porch. The ones who could pay more sat up front, at that western wall, the poorer folk were further back. From time to time a Chazan would come, a Jewish singer. When he was a good one, the news spread like wildfire that this or another came and that he would sing, and almost the entire Izbica would come to listen. And then he would leave. That was the entire life there.

Some people just waited for a Friday. Soldiers from an outpost, far removed from others, were by obligation invited by our Jews for a Friday dinner, that's how you lived back then. Once from nearby Zamość came the so–called more enlightened Jews. More enlightened in their case meant a bit better assimilated, like intelligentsia, or students. They came on Saturday, by bike, which was a sin! And they didn't even have caps! It was something inexcusable in Izbica. I remember that from the group of those Orthodox Jews – "Jesziwasbuchier" this group was called – people would chase them until the cyclists disappeared beyond the town. It's a very orthodox town, and poor. How did the people make a living? There were some three oil factories, two tanneries, there were various shoemakers, tailors, there were locksmiths, mechanics, there were breweries, there were six libraries, there was a cinema, and an amateur theatre. The cultural life was very active. There was a fire department in Izbica, and a Pole was its chief. Then the chief was a Jew. Where there was a fire, they came with a fire extinguisher, and they manually pumped the water to douse the flames. So it looked as if they were peeing on this fire. They were all volunteers. I recall that once a house caught fire, and a tailor who lived there remembered that he put his life's savings into a straw mattress. He wanted to save his money, so he went in, burned there, never came out. I remember a "looney" – there was a woman, a poor one, she walked the streets in rags, and, what is interesting, she had a watch. When someone asked her "What's the time?" she couldn't tell you, but when asked 'What's the time on the long hand?", she did. "And on the short one?" – and she also answered. And then you knew the exact time... But there was never once a situation that she'd just tell you "three o'clock", never. And people toyed with her like this. But then some very pious Jew came from America and married her. And it turned out that this poor woman in rags got nicely clothed, and was a pretty nice–looking lady. They even had a child. They built a house in Izbica, which stands to this day. There was just one telephone, at the police station. When I wanted to call nearby town like Krasnystaw or Lublin, I had to go to the post office, or to this Zylberman, and turn the crank until the central in Lublin came through. And you had to make an arrangement, so that the next day on, say, five or six o'clock this or another man could answer the call. And the post office would send a courier or a letter to him, informing him that he should come to the post office on the next day. And you called on the next day, and this man waited on the other end. It was nothing like nowadays. And, of course, transport was horse–reliant. Then there were horse–pulled carts, you put boards on those carts and you could ride on them. Then there happened the so–called progress, these were not just simple carts anymore, I can remember that. First, a Jew built a sort of a bus, just without an engine, called it an omnibus. Another did an omnibus where you could sit, and there were benches by the walls, like a bus, only not with this kind of seats, only these benches. And the horses – there were several healthy horses, and that was how you got to Krasnystaw or even to Lublin, or Zamość. Then a doctor came, I can't remember his name, and he was the first one to have a car. He even had a driver. A very rich doctor. When one day to Izbica came [opel kapitan], the entire town came to see. 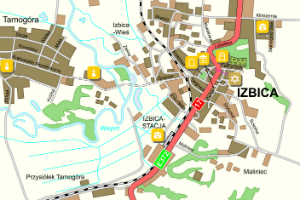