A story by Zofia Sarzyńska

On Tuesdays and Fridays there were fairs organised in Kazimierz. On Tuesdays there was a big one, on Fridays a smaller one. There were bunches of shoes, and everyone could try them on. And there were clothes, suits, pots, all the things, spread across the entire fair. When someone tried something on, a Jew would say: "Nice, nice!" And it was the best thing. One friend, a widow, married her farm–hand, much younger than she was, and came to the fair to buy him a suit. And he says: "Buy him this, buy it. He's a good lad, buy it for him". All while it was her husband the Jew was talking about. Everyone laughed like there was no tomorrow. He says: "Buy it for him, because he's a good lad, buy it" and would tap him, and try things on, and all. He would make all the corrections as needed, in the spot, everything. They were really resourceful. A Jew didn't eat if he didn't earn it. He would go around very late, but if he didn't earn a thing, he wouldn't eat a thing. Usually in Kazimierz Jews weren't very rich, but were kind regardless. The shops were open until six o'clock, you couldn't trade after six. But if you opened the shop door after six, they would let you in still, and if a cop caught you you, he'd write a report. So they gave presents to policemen, on Christmas and Easter. Where I lived, I had a policeman as a neighbour. The Jews wouldn't sometimes know where he lives, so they'd come to us. And my brother was always up for jokes, he shouted: "You can leave it here". And the gifts were for the policemen. On Sunday you couldn't trade, if a policeman caught you... But you could run the soda shops. I mean, like ice cream, cookies, candies. That you could, but not a grocery, shoe or textile stores. One such textile store belonged to Lubowa. "Mrs. Lubowa, I wanted some fabric for a dress". "Here you go". "But I don't have the money!" "That's fine, you'll pay when you can, no problem". There was the only textile store in Kazimierz. And she had beautiful things there. 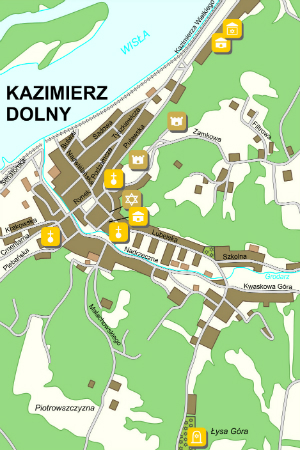