If we agree with the statement that the Carpathians are the fortress, then the route Ivano-Frankivsk-Rakhiv is the main gate to the fortress, its ceremonial entrance. And the most important word, which opens up another perspective: is Delatyn. 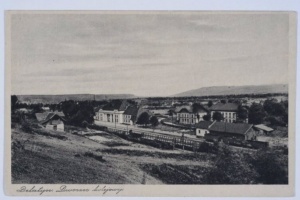 Delatyn is situated deep in the mountains, in the valley of the Prut River crossing the mountain region; the highest mountain in the area is Vavtorov (1,059 m). The first written mention of the town dates back to 1370, and the crown privilege of 1578 placed Delatyn under the Magdeburg law. Salt, first mined near the town in the 16th century, became the basis of the town’s development. Hence, there are a symbolic 10 cones of salt on Delatyn’s current coat of arms. Delatyn salt refineries began operating on an industrial scale in the 19th century, with salt production gradually becoming a mechanised process. In 1870, a steam engine was established in the refinery and two pumps were installed in the mines, extracting 155 quintals of salt a day. The salt deposits allowed for the establishment of spa facilities. Mineral springs were used to treat rheumatism (with salt baths) and respiratory diseases (with salt inhalations): the well-known health resort in Yaremche was just about 10 km away. About 8,000 people live in Delatyn today, and the town has become one of the traditional Hutsul folk craft centres in Ukraine, which the autochthonous dwellers of the Carpathians, the ethnic Hutsuls, mountain cattle-breeders supply with their wooden, glass, clay, and textile crafts. 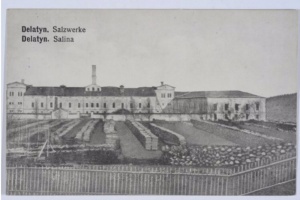 Next to the train station: a salt works with a large park. Hotels: Drimmer and Dicker. Restaurants: Rummel and Stefaniuk. In the eastern part of the city, a very strong source of salt with mineral baths; guests are almost exclusively Jews. A beautiful view of the city from the cliff above the baths. A trip to Malava (844 m, 1 1/2 hrs.) with vast views of the Prut valley, the Hutsul Beskidy and Gorgany. In Łuh (5 km): a beautiful Orthodox church built by the Hutsuls. Delatyn opens to the territory inhabited by the Hutsuls.

The first mention of Jews in Delatyn dates back to 1767. There were 87 Jews living in the town at that time, employed as traders and craftsmen. In the 18th century, many local Jews inspired by the rumours of the upcoming redemption, joined the sect of the false messiach Sabbetai Zevi (1626–1676); there is even a legend that the Shabbetai personally visited the nearby town of Kolomyia, which of course never happened. In the 18th century, Delatyn became the property of Count Potocki, who fostered the economic development of the Jewish community by extending to them various lease-holding privileges, including those for wood-cutting and lumber freight, alcohol production, and purveying of the troops and the count’s court. 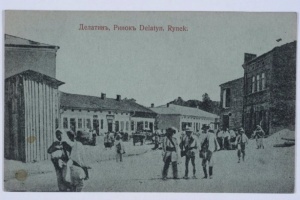 In the 19th century, Delatyn was a typical Galician shtetl. A sawmill and a mill on the Peremyska River were leased by Jewish entrepreneurs for more than a century. Delatyn aslo boasted Jewish farm-owners such as Dr. Janina Bloch and Kopel Seinfeld, who were engaged in producing and selling grain. Lumber industry particularly flourished in Delatyn. In 1929, there were four sawmills in town that belonged to Jewish families: the Blochs, the Fogels, the Jagers, the Friedfertigs, and the Kleins. Jews such as Shlomo Bernstein owned the Delatyn power plant and many other manufacturing facilities, while such as K. Belstein worked as doctors at the local spa.

There were two wooden synagogues in town, both destroyed by the Nazis.

The rabbis serving the community of Delatyn in the 19th century included several outstanding scholars such as Naftali Hersh Teomim, Naftali Ehrlich, and Azriel Landau, and at the beginning of the 20th century Yakov Hurwitz. In 1895–1910, there was a Jewish school in Delatyn, headed by Chaim Bardach.

During World War I, many soldiers from Delatyn fought for the Austro-Hungarians. The Russian troops first captured Delatyn in October 1914, yet the town changed hands several times during the military campaign. After the Russian offensive in 1916 (known as the Brusilov Offensive), the front line ran along the Prut River. Delatyn suffered a great deal: during the war, 80 percent of the town’s (mostly wooden) buildings were destroyed. 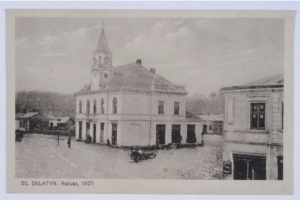 Chaim Bloch (1881–1973) was a rabbi, military chaplain, journalist, and a writer who came from a well-known family of Jewish rabbis and scholars of Delatyn and Nadvirna and was a descendant of the founder of Hasidism, the Baal Shem Tov. He studied at a local yeshivah for a rabbinic degree, but when the town was seized by the Russians, he moved to Vienna together with his wife and children. From 1915, he served in the Austro-Hungarian army as a chaplain serving the Jewish prisoners of war. During the war, he wrote Erinnerungen aus einem Kriegsgefangenenlager (Ger.: Memories from a POW Camp), a unique document shedding light on the plight of the Jewish soldiers during the war. In 1939, he emigrated to New York City. His book Der Prager Golem: Von seiner “Geburt” bis zu seinem “Tod” (Ger.: The Golem of Prague: From “Birth” to “Death,” 1920) was heavily based on Jewish folklore and retold the legend of the Golem, an artificial being allegedly created by the 16 th -century Rabbi Loew (Maharal of Prague) in order to defend the medieval Jewish ghetto.

In the interwar period, Delatyn maintained its status as a medical spa and water resort. Its Jewish inhabitants served as prominent lawyers, notaries, state officials, teachers, merchants, and also bank, restaurant café, and hardware store owners. Most local Jews engaged in various crafts: they were tailors, carpenters, furriers, and butchers, but people of liberal professions.

At the turn of the 19th century, the majority of Jews in Delatyn were traditional, who eventually formed the core of the rising Orthodox movement. Among the local Hasidim, most followed the tsaddikim (Hasidic masters) from Zhydachiv, Sadhora, and Vyzhnytsia. Many Jews of the younger generation supported various forms of Zionism and joined a number of Jewish organisations and political parties, such as Poale Zion and the Hashomer Hatzair youth movement.

In present-day Delatyn, it is worthwhile to visit a brick house established by the Jewish financier and philanthropist, Baron Maurice de Hirsch and designed by architect Leon Borgenischt. In 1932, it was renovated thanks to the efforts of the Jewish cultural and educational organisation Tarbut. The house hosted a library, a reading room, a club, and an apartment where the director of the institution lived.

In September 1939, Polish government officials fleeing from the Germans to Romania fled through Delatyn. At the end of September, the Red Army captured the town. The Soviets began deportations of Poles, Jews and Ukrainians engaged in national-democratic movements or belonging to a wrong class (bourgeoisie) to Siberia and Kazakhstan. The arrival of the Hungarian and German troops in June and July 1941, marked the most tragic period in the history of the town’s Jewish community. In 1941–1943, more than 3,000 Jews were murdered in the Delatyn area. In July 1941, a Judenrat was set up. During an Aktion on October 16, 1941, the Gestapo troops surrounded the town and began to inspect the documents. The German authorities, under the pretence that Jews would be given land, announced that Jews would have to be registered. When all the Jews had assembled to do this, they were brought to a timber processing factory for selection. From there, the elderly were taken to the Olkhovets wilderness and shot dead, while young people were kept for forced labor. Altogether 1,900 Jews were executed during this first Aktion. Some Jews were rounded up and shot in Stanisławów (now Ivano-Frankivsk) during the second Aktion. During the third Aktion, 200 Jews from the nearby Tatariv were murdered at the cemetery in Delatyn. The fourth Aktion took place in March 1942, when 456 Jewish people were shot: first, almost 200 local Jews were arrested and then those from the neighbouring villages and towns were brought in. They were all taken to the Jewish cemetery and executed. At the end of 1942, 200 Jews from Delatyn and the surrounding area were deported to the Bełżec death camp. The fifth and final mass execution operation was carried out in November and December 1943. The Gestapo and soldiers of the Vlasov army surrounded Delatyn at night and started shelling. People who ran into the street in panic were murdered. The Nazis rounded up all the Jews in the town centre, shot them randomly, loaded living and dead into trucks and transported them to the Olkhovets forest. Altogether, 712 Jews and 95 Ukrainians were murdered in this fifth Aktion. At the end of 1943, the town was proclaimed Judenrein, “free of Jews.” The Nazis confiscated and ravaged Jewish property.

In March 1944, the Soviet army took control of Delatyn, but in April the Nazis reclaimed the town. Eventually, the Soviet rule was reinstated on July 26, 1944.

The mass grave of local people shot in 1941–1943, most of them of Jewish origin, is situated in the Olkhovets forest, north of the town. A monument commemorating the victims, with an inscription in three languages, marks the site. The only place where traces of the Delatyn Jewish community have been preserved is the Jewish cemetery with several hundred matzevot. During Soviet times, it was not fenced and some gravestones were pillaged and used to build roads. Today, the cemetery is fenced, some matzevot have been set up in their original places, and a com- memorative plaque has been placed on the gate.

Today, there are two associations of Delatyn Jews and their descendants, one in New York and the other in Israel. At the beginning of the 1990s, the Dutch film director Willi Lindwer visited the town together with his father, Berl Nuchim, whose family perished in Delatyn during the Holocaust. Lindwer’s documentary Return to My Shtetl Delatyn tells the story of a Jewish family and its community. One of the protagonists is Anna Yosypchuk, a Jewish woman who had married a Ukrainian and became a Christian before the war, which saved her life during the Nazi occupation. After the war, she became the Mayor of Delatyn. 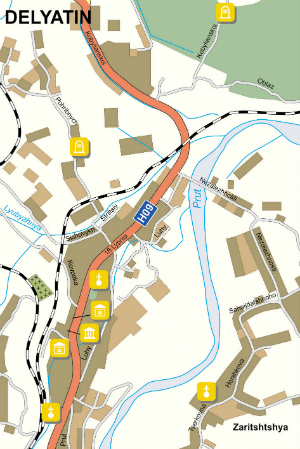