People spoke Yiddish, prayed in Hebrew, learnt Polish, and talked in Belarusian with their non-Jewish neighbours. 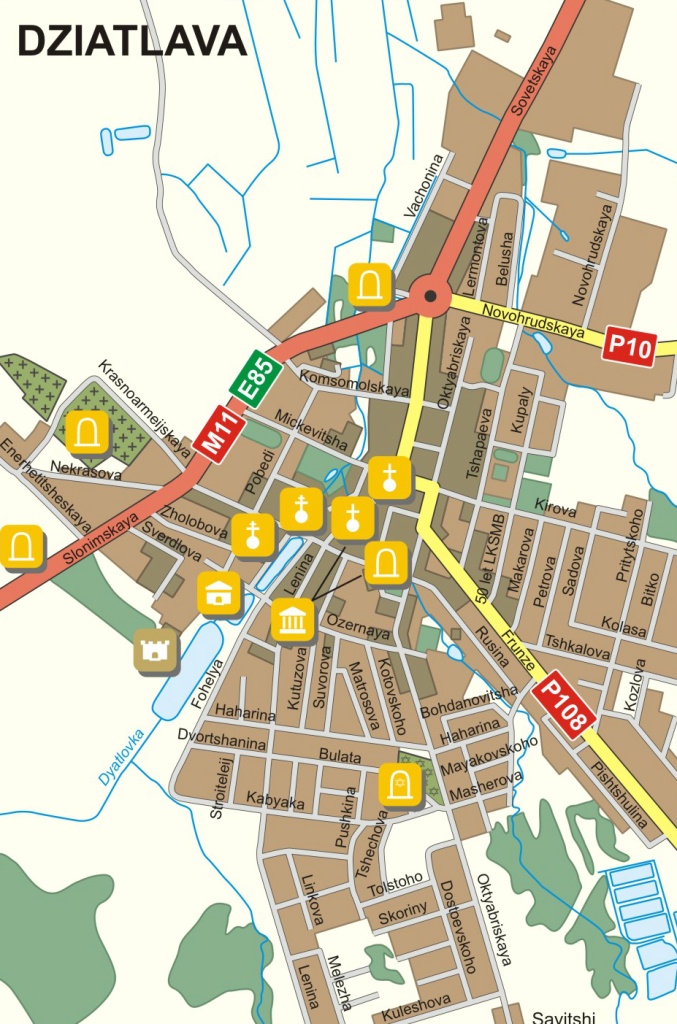 Dzyatlava (Zdzięcioł) is first mentioned in the documents in the mid-15th century, when it was a village on the territory of the Troki (today Trakai, Lithuania) Palatinate. About 1492, Grand Duke Casimir IV financed the construction there of the Church of the Dormition of the Blessed Virgin Mary. In 1498, Grand Duke Alexander transferred Zdziecel (Dzyatlava) to Lithuanian Hetman Konstanty Ostrogski, for life possession, giving him a privilege to transform it into a town. At the beginning of the 16th century, Prince Ostrogski built there a wooden Orthodox church and established a wooden fortified castle (referred to in documents as Zdzieteło mansion).

The 1580 inventory of the town lists 118 houses, a market square, and five streets. In the early 17th century, Dzyatlava became the property of the Sapieha family of Polish magnates. From 1624 to 1646, Prince Sapieha built a stone church, the Church of the Assumption of the Mother of God, and a hospital. From 1685, the town was owned by the Radziwiłł family of the wealthiest and most influential Polish magnates, who erected a two-storey palace in the late 17th century. This was torn down during the Great Northern War in the early 18th century and rebuilt in 1751 on the site of the 16th-century castle.

During the Great Northern War, in 1708, Russian troops were quartered in the vicinity of the town, while Tsar Peter I stayed in the town for a week. Later, Dzyatlava was taken over by the Swedes, who set fire to the town and the castle. In 1784, the town had 186 houses, five streets, and three blind alleys; there were three mills, a school, a hospital, and a bathhouse. Following the Third Partition of Poland in 1795, the town became part of the Russian Empire. Because its last owner, Stanisław Sołtan, took part in the Polish November Uprising against the Russian dominion (1830–1831), his property was confiscated by the state treasury, and soldiers were quartered in his palace and farm buildings.

In 1866, as part of the Russification policy, Zdzięcioł was officially renamed Dzyatlava after the 1864 Polish rebellion against Russia. In the documents of the Grand Duchy of Lithuania, the town was referred to as Zdziecel (Zdziacel, Zdietiel), but the Jews called it “Zetel,” as there is no letter representing “dz” in Yiddish.

The history of the Jewish community of Dzyatlava dates back to the late 16th century and is primarily linked to the Polish private ownership of the town; the 1580 town inventory lists certain Misan, a Jew, as one of 10 house owners at the marketplace. According to the 1699 inventory, there were 126 houses in Dzyatlava, of which 25 belonged to Jews.

After the partitions of Poland, the condition of Jews deteriorated not only due to the tsarist policy, but also because of wars, confiscations, and frequent fires. Like other towns built mainly of wood, Dzyatlava suffered from at least nine fires in the 19th century. A blaze in 1874 destroyed a synagogue, 211 houses, and 119 farm buildings, resulting in damage amounting to 134,500 roubles.

Some fires were allegendly started by arson; for example, over several days in April 1844, eight fires were set deliberately: on Friday night (April 7), a pigsty belonging to a Jew, Wolf Wolsin, was set on fire; the following night the same happened to Wolf Razważski’s pigsty, then to Lejzer Giercowski’s pigsty, peasant Mikhail Chucheyka’s shed, and the shed of a peasant widow, Anna Grajewska. The suspects – three soldiers of the 5th Mounted Light Artillery Division stationed in the town and a peasant from Dzyatlava – were arrested.

On the night of October 19, 1844, a fire broke out in Zaułek Kościelny destroying Abram Levin’s barn and granary, with a loss estimated at 424 roubles, approximately a price of a luxury house in the area. As the community was becoming increasingly impoverished, 35 Jews from Dzyatlava requested tax allowances and cash benefits to be able to rebuild their houses destroyed in fires. In response, the provincial administration decided that wood should be given to those families. This decision, however, was not implemented, as “there was not enough wood in the forests near Dzyatlava to satisfy even the needs of state peasants.”

The Jewish population of Dzyatlava gradually increased. In the late 1860s, the town had 1,576 inhabitants, including 1,241 Jews (78 percent of its entire population, but 100 percent of its merchants and burghers).

In the late 19th and early 20th centuries, the town economy improved. The 1900 address directory The Russian Book of Industry, Agriculture, and Administration listed the following companies belonging to Dzyatlava’s Jews: a pharmacy, mead breweries, and trading companies dealing in colonial goods, iron artifacts, leather and other manufactured goods, grains, and eggs. In addition, the town was famous for producing wooden parquet known as “Dzyatlava parquet.”

Many notable rabbis and religious activists came from Dzyatlava, including Haim Rapoport (c. 1700–1771), who served as a rabbi in Dzyatlava in 1720–1729 and was later a rabbi in Lwów; Yakov Krantz (1741–1824), known as the Maggid of Dubno, perhaps the most famous preacher in East Europe; Israel Meir ha-Kohen Poupko (1838–1933), known as the Hafetz Haim (after the title of his main work), founder of the Radun yeshiva, and the paramount East European legal authority and religious thinker in the 1870s–1930s; Tzvi Josef Reznik (1841–1912), head of the Suwałki yeshiva; Reznik’s son Menachem Risikoff (1866–1960), an Orthodox rabbi and prolific religious writer in Brooklyn, NY; and Baruch Sorotzkin (1917–1979), head of the Telz yeshiva in Cleveland, Ohio.

In 1867, the town had one wooden synagogue and four Jewish prayer houses. The stone synagogue built in the late 19th century has been preserved to this day. It is currently used by the fire brigade, but the position of its side windows – one row of large windows and two rows of smaller-sized ones – clearly indicates what was its former function. Next to the synagogue there was once another prayer house, but a bank was built in its place in the Soviet times.

From the fall of 1915 to December 1918, Dzyatlava was occupied by the Nazi Germans. From March 1918, it was part of the Belorussian People's Republic, and in 1919 it was captured by Polish troops. Following the Treaty of Riga in 1921, Dzyatlava was incorporated into the Second Polish Republic as an administrative centre of a community (gmina) in the County of Nowogródek (now Navahrudak), in the Nowogródek Voivodeship (Palatinate).

In the interwar period, Jews accounted for around 75 percent of the town population, with about 3,450 Jews living there in 1926. Out of 621 Jewish families, 303 earned their living from crafts (working mainly as tailors and shoemakers) and 210 from trade. There were four mills and three traction engines that generated electricity and supplied power to the town. Electricity was supplied until midnight, and just one light bulb was allocated to each house.

The town population consisted of 6,000 souls, 4,500 of them Jewish; the rest were Belarusians and a few Poles. Cultural institutions in Dzyatlava included a Jewish school (approx. 100 children and 6 teachers), a Hebrew school (250 children and 7 teachers), and the community-run Talmud Torah school for poor children (100 children and 4 teachers), established as early as in 1909. Jewish children also attended a state primary school. They continued their education in secondary schools in Grodno, Lida, and Vilnius. A permanent cinema operated in the town. A Jewish theatre group staged performances. There was a large Jewish library.

When my father was 6 years old, he was sent to one of the four Zetel schools, which was called Talmud Torah; it was a Jewish religious school where they also taught the Polish language. [...] Officials, such as police officers, judges, or municipal administration officials, did not speak Yiddish. In the Talmud Torah, lessons were conducted in Yiddish, but secular subjects were taught in Polish. Religious subjects were taught in Hebrew, but translated into Yiddish for discussion.

After the Red Army took control of Dzyatlava in September 1939, the town was incorporated into the Belorussian Soviet Socialist Republic, receiving the official status of an urban-type settlement and becoming the capital of the Baranavichy District.

On June 30, 1941, the Third Reich forces entered Dzyatlava, and repression against the Jewish community started soon after. Jews were arrested, forced to wear the Star of David, and deprived of their valuables; members of the Jewish intelligentsia were shot, and a Judenrat was set up. On December 15, 1941, about 400 Jewish workers were transported to the ghetto in Dvarets. December 1941 saw the emergence of the Jewish resistance movement. Its members tried to acquire weapons and ammunition and established contacts with partisan units. On February 22, 1942, an order was issued setting up a ghetto in Dzyatlava around the synagogue and on Lisogorska and Slonimska Streets. As many as 4,500 Jews were crowded in this small area. On April 30, 1942, the Germans, aided by the local police, started to drive people out of their houses and to round them up in the market square. Those who were found hiding or tried to put up resistance were killed on the spot. Skilled Jewish men were selected and kept behind, while the rest were transported to the nearby Kurpieszowski Forest and shot. Around 1,200 people were killed on that day. The last extermination operation took place on August 6, 1942, when approx. 200 young men were selected and transported to Nowogródek, while the rest were taken to the Jewish cemetery and forced to dig a mass grave for themselves. Around 2,000 were killed in this operation, which brought an end to the Jewish community of Dzyatlava.

About half a kilometer north of the town, on the left of the road to Navahrudak, 2,800 Dzyatlava residents were murdered by the Nazis in April 1942. In 1945, an obelisk to commemorate them was erected. At the Jewish cemetery on the southern outskirts of Dzyatlava, there is the mass grave of 3,000 local residents who perished at the hands of the Nazis in August 1942. An obelisk was erected there in 1945, too, and in 2003 a commemorative plaque with the Star of David and inscriptions in Hebrew and Polish was put up.

The history and culture of Dzyatlava’s Jews is shown in the school museum located in the local middle school.

Nothing is left of the old Jewish cemetery that was located next to the synagogue. Its area has been built over completely. A partially preserved newer Jewish cemetery, with only a few dozen gravestones with different degrees of damage, is situated in the southern part of the town. A concrete wall was built around it in 1997, thanks to the efforts of the descendants of the Dzyatlava Jews. In 2006, thanks to the Simon Mark Lazarus’ foundation, another memorial was unveiled at the cemetery, commemorating the 54 Jews of Dvarets killed here in 1942. “Eternal memory to the victims of the Holocaust. May their souls be bound in the bond of life.”

Dvarets (13 km): the Church of St. Anthony of Padua; the Orthodox Church of the Protection of Our Lady.

Navajelnia (13 km): a memorial to Holocaust victims at the railway station; a historic column (18th c.); the Orthodox Church of the Nativity of the Blessed Virgin Mary (1876–1879); the Church of the Sacred Heart of Jesus. 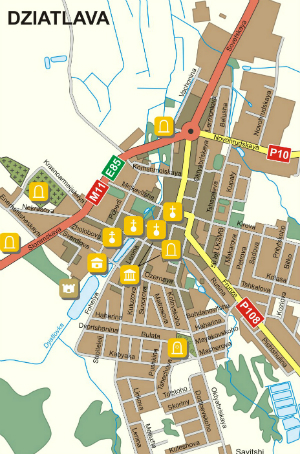