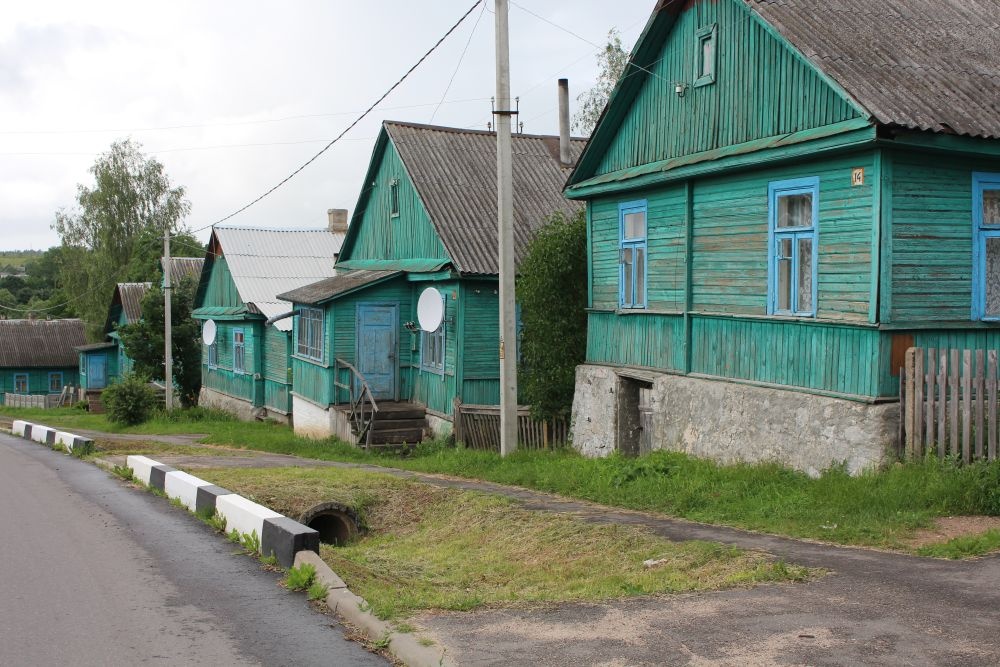 Haradzishcha, on the Servetsh River, is mentioned for the first time in written sources in 1413 as a settlement in the Grand Duchy of Lithuania. Some local scholars believe that Haradzishcha was actually the legendary Voruta, the capital of the Grand Duchy of Lithuania in the times of its first Grand Duke, Mindaugas. In 1506, the Niemirowicz family, who owned Haradzishcha, defeated Tatar forces nearby. Their Tatar captives subsequently formed the Tatar community of Haradzishcha. A Muslim cemetery (mizar) survived in town, and one of the streets until recently was called Tatarska Street (currently it is Praletarskaia St.). In the second half of the 16th century, the then owners of Haradzishcha – the noble family of Chodkiewicz – converted from Orthodox Christianity to Catholicism, leaving the Orthodox churches they had established. The new owner, Trojan Piotrowski, built a Calvinist church that was later converted into a Catholic church and then again back into an Orthodox Church: since 1868, it has functioned as Holy Trinity Orthodox Church.

At the turn of the 19th and 20th century, 2,631 people lived in the town, including 2,108 Jews (80 percent). During World War I, Haradzishcha came under the German occupation. The front line coincided with the Servetsh River. During the occupation, many photographs were taken that recorded the almost complete destruction of Haradzishcha. The 1828 population was only one-third of the pre-1914 population: 1,021 residents, including 760 Jews.

In the 18th century, Haradzishcha changed its official status from a grand-ducal residence to a town. The town received the privilege allowing for regular market fairs, due to which the town attracted craftsmen, traders, and merchants, including Jews. The Jewish community of Haradzishcha numbered 422 people in 1766, and 277 people in 1834, which amounted to nearly a half of the town population. In 1840, Jews owned 48 houses which were inhabited by 55 families. At that time, the town was home to the families of craftsmans Michel Krolowitz and Chaim Gudamovich, tavern keepers Beniamin Bogatun and Shmoila Vonkhadlo, butcher Mendel Molchadsky and others. The Jews lived in the centre of the town. In the main street (formerly Nowogrodzka, now Edunova St.), several early 20th-century wooden residential buildings have survived.

In 1852, a wooden synagogue and a wooden beth mid were established. The community’s rabbi at that time was Hirsch Vonkhadlo. The community also had its own mohel, who performed circumcisions, and a kosher butcher. In the second half of the 19th century, a brick synagogue was built in the centre of the town. There were also four prayer houses. In the Soviet times the synagogue building housed a community centre, but it was pulled down in 1999.

The legend about Marshal Piłsudski saved by a Jew

During the Polish-Soviet Russia War of 1919–1920, Józef Piłsudski was hiding from the Bolsheviks and found himself in the vicinity of Haradzishcha. Legend has it that a Jew by the name of Lickiewicz from Haradzishcha (or, according to a different version, from the village of Arabovshchina, which is part of the Haradzishcha district) saved his life.

The Jew disguised Piłsudski in his wife’s female jacket and told him to milk the cow. After the danger was over, Lickiewicz led the commander to his unit. Piłsudski gave the Jew a Vilnius-style sukmana (a peasant coat) as a reward, and a few years later he sent him a permanent pass to the Belweder – the Warsaw residence of Poland’s leader. When Lickiewicz visited Warsaw, Piłsudski, already the Chief of State, gave him money, with which he built a steam mill that worked in the village of Arabovshchina until the 1980s.

In September 1939, a wave of refugees flooded into western Belorussia, the territory of which had been seized by the Red Army. In August 1940, 1,337 refugees were registered in Haradzishcha. The size of the Jewish community increased to nearly 3,000 people. Some were arrested and deported deep into the USSR. At the beginning of 1940, a school taught in Yiddish was opened. The German occupation began on July 10, 1941; only a few days after the Germans arrived, a ghetto was established and executions of the local Jews began. On October 20–21, 1941, after an SS unit arrived in the town, more than 1,500 Jews from Haradzishcha were shot at the Pohorelce forest wilderness and in the Michnovshtchina Forest, both just a few kilometres from the town. The victims included several dozen representatives of the local intelligentsia: doctors, teachers, and lawyers. Further liquidation operations were carried out in the Haradzishcha ghetto in spring and summer 1942. During the German occupation, which lasted until December 24, 1943, about 4,000 local inhabitants were killed, mainly of them Jews.

In the village of Koldichevo, six km from Haradzishcha, a Nazi death camp functioned from March 1942 until June 1944. More than 22,000 people were killed there – mostly Jews, but also Roma, Belarusians, and Poles.

In 1964, a memorial was established to the victims of fascism, the inmates of the Koldichevo camp. An inscription reading “to the victims of the Holocaust” was added in 1994. In 2007, near the former entrance into the camp, on the road from Baranovichi to Navahrudak, a memorial to the victims of Koldichevo was unveiled. Three religious symbols were placed on it: a Star of David, an Orthodox cross, and a Catholic cross. The memorial also includes a plaque commemorating the Roma killed here.

A diary from the Warsaw Ghetto, written by Chaim Kaplan, born in Haradzishcha

Chaim Kaplan, the author of one of the four diaries written in the Warsaw Ghetto that have survived, was born in Haradzishcha in 1880. In 1905, he moved to Warsaw, where he set up one of the first primary schools taught in Hebrew, which he ran for the next 34 years. He authored Hebrew Grammar (New York 1926), a Haggadah with commentary (New York, 1927), and an anthology of articles on Jewish education and pedagogy (Warsaw, 1937). His Warsaw Ghetto diary covered the period from September 1, 1939 to August 4, 1942. Chaim Kaplan was murdered in Treblinka, probably towards the end of 1942 or at the beginning of 1943. The diary was first published in English in 1965, under the title Scroll of Agony.

Haradzishcha’s cemeteries bear witness to the many ethnicities and religious groups that contributed to the history of this place. Orthodox, Catholic, Jewish, and Tatar cemeteries were located in different parts of the town. The wooden houses along the streets of Haradzishcha, standing on the high foundations where there used to be Jewish shops, give the town a special atmosphere.

Wrzątek Spring: a non-freezing hot-water spring near the village of Jasieniec.

Koldichevo (6 km): a memorial at the site of the Koldichevo death camp (1942–1944); foundations of the prison within the camp; the remains of the Szalewicz family manor park.

Zaosie (12 km): the wooden manor house in which the poet Adam Mickiewicz was born and lived, currently a museum.

Baranovichi (28 km): two former synagogues, currently a vet clinic and a residential building (19th c.); two yeshivas, currently school buildings; a Jewish cemetery with two memorials; the Orthodox Church of the Holy Myrrh-Bearing Women; the Church of the Exaltation of the Holy Cross (1924); the Orthodox Church of the Protection of the Mother of God (1921); a fire station from the times of the Second Polish Republic; the manor houses of the Królewski and Razwodowski families; the buildings of a post office, a bank, and the municipal slaughterhouse; civil servants’ housing estate (circa 1925); a collection of Judaica at the Local History Museum.

Novaia Mysh (29 km): a former synagogue, currently a community centre; a former rabbinical school; a brick-built inn; a neo-Gothic distillery building; a Jewish cemetery with Rabbi Yechiel Musher’s ohel; a memorial to the victims of an execution in the forest by the road to Kazliakevichy; the Church of the Transfiguration (1825) with baroque interior decorations moved from Nesvizh; an Orthodox church (1859); an interwar Polish school; the remains of a Polish cemetery (19th c.); Chodkiewicz Castle fortification walls; remains of the manor alley.

Liakhavichy (45 km): the birthplace of Jakub Szynkiewicz (1884–1966), the Great Mufti of Polish Tatars, who rendered great services to that community (1884–1966); a former synagogue, currently a tinned-food factory (late 19th c.); brick Jewish houses (early 20th c.); a monument at the site of Chodkiewicz Castle; Church of St. Joseph (1910); a Catholic and Orthodox cemetery with ruins of chapels. 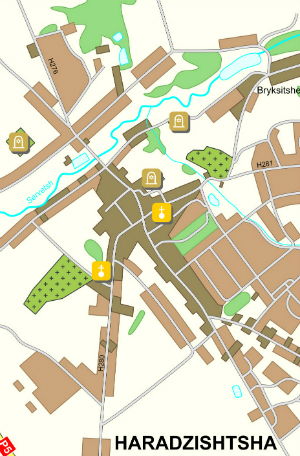