Kovel was the largest railway hub in the East and a direct connection Warsaw-Kovel was faster than today. The ride was less than 5 hours [...], and the trains [...] had three classes. The first was the most expensive. And there was even a saying that the Jews travelled in the third class, because there was no fourth one. 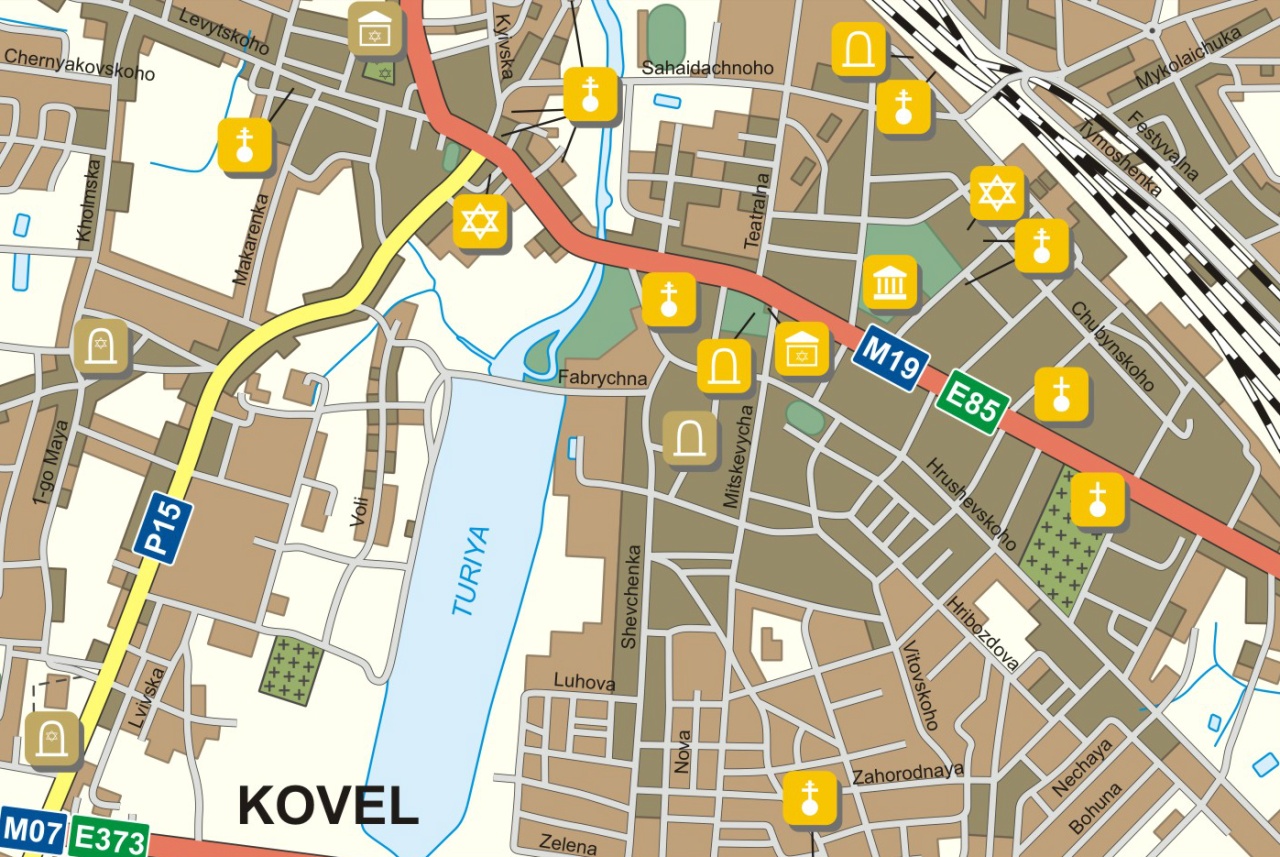 The smiths of Kovel

Kovel is located in the very centre of Volhynia Province, on both banks of the Turija River, a tributary of the Pripyat flowing from south to north. The first written mention of Kovel is dated to 1310. Perhaps the town owes its name to the word kowal, meaning “blacksmith” – a common trade in this area in the 10th–13th centuries. A local legend tells about a blacksmith who made a sword for Prince Danylo of the medieval Galicia-Volhynia Palatinate.

On December 24, 1518, in Brest, King Sigismund I granted Prince Bazyli Sanguszko a privilege establishing the town around the medieval Kovel and granted the town with the Magdeburg law.

The Jews of Kovel

Jewish settlement in Kovel began after the town was granted municipal rights in 1518. In 1536, Queen Bona confirmed the town privileges and obligated the Jews of Kovel to take part in repairing its walls and bridges. Additionally, she issued a special privilege allowing Jews to settle locally but only on streets designated for them and not among Orthodox Christians. In 1547, Bona imposed a tax on Jewish houses (except the rabbi’s house) and made the Jews equal to the Christian population in terms of their privileges and duties before the crown.

As elsewhere, devastating pogroms and bloody persecutions of the Jews took place during the mid-17th-century Cossack revolution. In 1650, however, local Jews managed to re-establish the kahal of Kovel and revive their economic activities due to the earlier privileges confirmed by King John II Casimir.

Kovel was a Jewish town, the outskirts of which, where the Ukrainians and Poles lived, formed a separate town. The river Turia flowed through the town. Kovel was divided into three different parts. On one side of the river there was the Old Town, called Zand [in Yiddish], or Sand, as it had been built on sandy ground. In the new part, on the other bank of the Turia, there was Kovel where the Poles lived, most of whom were employees of a railroad company [...]. That was a separate town. There were fewer Ukrainians than Poles there. The Ukrainian farms began just behind the main street. Those three worlds lived side by side. [...]

That small county town was something more than a shtetl. It was a bastion of the Jewish Hebrew-speaking intelligentsia. The older people still spoke Russian, but the new generation had already adopted the Polish language.

The best-known 16th–17th-century rabbis of Kovel and heads of the local yeshivah were Shimon and Yitzhak ben Nathan Shapiro and Yehuda (Yudl, Idl), a descendant of Yehuda Löw ben Bezalel (the Maharal of Prague). After Rabbi Mordechai of Nesukhozhe (currently the village of Toikut in Kovel Region) (1752–1800) settled in Kovel, Hasidim established in town their headquarters.

A synagogue was built in 1660, but in 1744, it was destroyed by fire. In 1857, another fire destroyed nearly all the town, including the synagogue. However, the town was later successfully rebuilt.

By the early 20th century, there were several synagogues in Kovel, one of them was the Great Synagogue, built in 1886–1907. This unique, though reconstructed, monument has retained its grandeur despite wars, revolutions, confiscations of Jewish religious property and its reconstruction. The former Great Synagogue in Kovel is located at the intersection of Nezalezhnosti St. and Volodymyrska St. and is one of the buildings of the local sewing factory, WKF Kovel. Before 2009, a Star of David was visible in front of the entrance to the synagogue, but later it was painted over.

In Zand there was a large, beautiful synagogue, in a somewhat fortified style. The best Jewish cantors used to perform there on holidays: Koussevitzky, Rozenblatt, etc. There was also a choir, which several of my classmates were in. And there was one more synagogue in the town, a private synagogue, built by a local rich man, Eppelbaum. He lived in what was called a sinful union with a Ukrainian woman; I remember that the town always held it against him. The story was that he had built the synagogue in order to wipe out that sin in the next life. We used to go there to pray on the important holidays: Rosh Hashanah, Yom Kippur, Passover, Shavuot and Sukkot [...]. That synagogue has remained in my memory as a tragic place.

In Kovel, just like elsewhere in tsarist Russia, theatrical performances in Yiddish were forbidden, and during World War I the war ministry forbade even to write letters in Yiddish. Yiddish troupes from Warsaw, Vilnius, and other places performed in Kovel on rare occasions trying to outwit the authorities and circumvent the law. They announced their performances as plays in German, whereas in fact the plays were performed in Yiddish, presented on the posters as a dialect called “deichmerish – ivri teich” (Hebrew-German). Elements of German were stronger in such performances than in colloquial Yiddish. The performances were usually attended by the rich citizens and by Jewish-Russian intelligentsia. Ordinary spectators showed little interest in such artistic events.

Paradoxically, the Yiddish theatre experienced a revival with the outbreak of World War I, during the German occupation, when the Jews were allowed to have cultural events and performances in their native language, that is, Yiddish. One of the stimuli that contributed to the emergence of the Kovel Jewish drama group was the difficult economic situation. Jewish refugees from nearby towns, fleeing from the war and the revolution, settled in their hundreds in Kovel. The town’s Jewish residents helped their brethren by organising a network of social services, for example, a mobile kitchen for a street canteen. Donations were scarce, therefore there emerged an idea of setting up a drama group that would combine business with pleasure: the group would demonstrate high artistic quality while the proceedings from the performances would be directed to the needy.

The group had two enthusiastic leaders: the talented director Moshe Pugach and the generous patron and head of the group Moshe Kagan. Both were the loyal devotees of Melpomene, and both had gained theatrical experience in the country in which Jewish theatrical life was then thriving – namely, in the USA. Their main goal was to foster a love of the theatre among the masses and to develop a sense of the quality performance. The repertoire they chose included a selection of the best European dramas as well as several plays by Jacob Gordin and Avrom Goldfaden. Pugach and Kagan put on stage three–four plays a year and quickly gathered a cast of talented young actors.

The activity of the Kovel Yiddish theatre group completely changed the perception of the Jewish theatre. It put an end to the contemptuous, but widely held, attitude towards “Tiyater” (Russianderogatory for “theatre”) as a Purimshpiel and towards actors as “comedians” who would lead people astray (into debauchery). In the first years of its existence, the Yiddish theatre group also created a bond between the audience in Kovel and theatrical troupes from other cities, such as Vilnius and Warsaw, which came to Kovel and performed on the premises provided by the local drama group. These troupes received help, technical support, and good advice on how to win hearts and minds of the local audience.

The Yiddish theatre group brought together people from all social strata. Even the representatives of the Jewish-Russian intelligentsia, educated in Russian literature and scornful of the Yiddish language, changed their attitude towards Yiddish literature and learnt to appreciate it. The “folkists” were active in running the group, too. And Zionist and nationalist circles were also attracted to the theatre group, particularly those attached to Hebrew culture. Even the community of religious Jewish town dwellers, who always opposed any theatrical activity as a sign of assimilation, made allowances for the sake of cultural development and started to attend performances.

Thus Kovel Yiddish theatre group became a non-partisan, neutral cultural endeavour which brought together and accommodated many different political groupings, theatre and folk art enthusiasts, and those who aimed to raise the general cultural level of the otherwise provincial Kovel Jews. Each of the above groups contributed something to the group’s activity. This made the group popular and ensured the support of the entire Jewish community of Kovel.

Michał Waszyński (Mosze Waks, 1904–1965) born in Kovel in the family of Hasidic blacksmith. As a teenager he interrupted his education in yeshiva, went off to Warsaw and became one of the most colourful figures in the history of Polish cinematography. In the 1930s, he directed 37 films, including smash hit films such as Antek Policmajster (Police Chief Antek, 1935) and Znachor (Quack, 1937). The most important of his achievements is Dybbuk (1937), which is the film adaptation of S. An-Ski’s play written in Yiddish language. During World War II, Waszyński found himself in Siberia, from where, together with the Polish Armed Forces of General Anders, he went through the combat route through Iraq, Iran and Palestine to Italy, which he immortalized in the film Wielka droga (Long Road, 1946). After World War II, he lived in Rome. Although he did not direct films anymore, he became an important figure in the Italian film industry. He collaborated with Orson Welles, Audrey Hepburn and Sophia Loren. The story of his life can be seen in the documentary The Prince and the Dybbuk (2017) awarded at the Venice Film Festival.

In 1939, there were 17,000 Jews among the 36,000 inhabitants of Kovel. After the town was annexed by the USSR in September 1939, the new authorities considered its well-to-do dwellers as the exploiters and blood-suckers and partially confiscated and partially nationalised their property and real estate. For instance, the Grinblats lost the three stores it owned, and Soviet officers were billeted in two rooms of their house. The same fate befell the Tenenboims, who owned a furniture factory.

On June 28, 1941, Kovel was captured by German troops. Only a small part of the town’s Jewish population managed to flee. About 1,000 Jews were killed during the first days of the occupation. On May 21, 1942, two ghettos were established. In one of them the Germans confined 8,000 people fit for work (and their family members), and in the other, located in the suburbs, they placed 6,000 people unfit for work. On July 2–4, 1942, the Jews from the second ghetto were transported out of the city and killed. On August 19, 1942, the Nazis began the liquidation of the first ghetto.

After the Soviets again took over the town, only about 40 surviving Jews returned to Kovel.

A memorial dedicated to the Jews shot in 1942 is located in the forest, on the right side of the road to Kamin-Kashyrskyi, a few kilometres from the edge of town near the village of Bakhiv. In 1944, a memorial post stood here with the number of 18,000 inscribed in it: the number of murdered Jews from the Kovel ghetto. In the 1960s, a high mound was constructed here. A granite monument was established in 1990, and further memorials were unveiled in 2002 and 2015. Unlike the previous memorials dedicated to the “peaceful Sovet citizens” murdered by the “Nazi invaders,” the post-communist memorials explicitly mentioned the Holocaust and the Jewish victimhood.

Turiisk (20 km): Jewish cemetery, (17th century) with a preserved funeral home of and a dozen of matzevahs

Trochenbrod (110 km): a monument in the place of a town once inhabited by Jews and wiped out during World War II 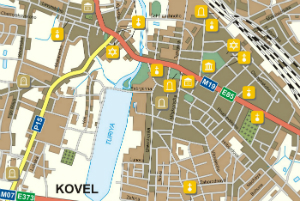