The town boasted for its shoemakers, tailors, home-owners, annual-fair days, market days, as well as for its fires.

The little town of Lunna was established in 1531 on the order of Queen Bona, who also gave permission for a marketplace and a tavern to be established there. The name Lunna derives from the Baltic word łunas (“mud”), or from the name of a marsh bird, łuń (“harrier”). The settlement was divided into two parts: the royal town and the land belonging to the Sapieha family. On the private estate, a settlement named Wola emerged, and the Jews moved there in 1785 after a fire in Lunna. The name Lunna-Wola is often found in the literature.

Once there was a little shtetl named Lunna. It was situated near the southern bank of the Nieman River and was surrounded by its lush green forests. A small town populated by 300 Jewish families, which was not known for its geniuses, famous rabbis, bright disciples or by any kind of glorious history whatsoever despite the fact that it was written in the Community’s historical documents that it had been traversed by the Napoleon armies at the time of his war against Russia. Trotzky also visited the headquarters, which were temporarily situated inside one of the town’s houses, at the time of the war between the Bolsheviks [and] the Poles.

The Jews of Lunna

Most likely, the Jewish community of Lunna emerged in the second half of the 16th century. The first written mention of the local Jews dates back to 1606: “A Jew from Lunna was carrying 40 tanned calf hides for sale.” During the 19th century, the number of Jews in the town steadily grew, and by the end of the century, it reached 965 in a total population of 1,211. The Wola suburb at that time was inhabited by 665 people, mainly Jews; Lunna and Wola had separate synagogues and Jewish cemeteries.

The Jews traditionally worked in trade and crafts. The first and the twenty-first day of each month were designated to be the market days, and annual fairs were held in April and December. Lunna was a center of the grain trade in the Grodno Province. The town had a synagogue, three Jewish prayer houses, a poorhouse, 20 little stores, three roadhouses, two inns, a bath, two windmills, an elementary state school, a distillery, a first-aid station, and a post office. In Wola there was a wooden synagogue, built towards the end of the 18th century. In 1901, Josel Rubinovich opened a photographic studio.

With the outbreak of World War I in August 1914, some of the town’s residents were called up into the Russian army. Judel Gisser, Mendel Kaplan from Lunna, and Aaron Fridman from Wola fell into German captivity. In autumn 1915, Lunna was occupied by German forces. Friedrich Grelle, a soldier of the German army, recollected: “We moved further, to the town of Lumno-Wola (Lunna), situated directly on the Neman River. […] there are few stone-built houses here, most of them are wooden, and the streets are not paved. All the Jews were still there, in the synagogue, at school, and in their homes. After we entered, as a force of one regiment, the Russians began to bombard the town with grenades from the opposite bank of the river. We deployed our forces behind the synagogue, where the Russians couldn’t do us any harm, but there were a few injured among the people, which caused terrible panic. Everyone started to flee from the town, wailing, cursing, and crying, with their children and possessions.”

The occupation authorities issued an order uniting Lunna and Wola into one town; they permitted the functioning of two synagogues in Lunna and one in Wola.

Between 1916 and 1921, the post of rabbi in Lunna was held by Isser Yehuda Unterman (1886–1976). After 1921 Unterman moved to Grodno, where he was also a rabbi and director of several yeshivot. Later, he emigrated to England, were he was the rabbi of the city of Liverpool from 1924. In 1946, he became Chief Rabbi of Tel Aviv-Jaffa, and in 1964–1972, he held the office of the Chief Ashkenazi Rabbi of Israel. In Lunna, Unterman was replaced by Tuvia Rotberg (executed by the Nazis in 1942).

In 1928, the Gmilut Hesed, a free-loan society was established, headed by the most distinguished Jews in town including Rabbi Rotberg .

The town economic life heavily depended on the timber and grain trade, the construction materials trade, small crafts, and light industry. As elsewhere in Belorussia, practically all tradesmen and craftsmen were Jews.

The town had three functioning synagogues, two schools, a theatre, and a fire brigade band. There were two charity associations caring for the sick and the poor, a bathhouse with a mikveh, and two Jewish cemeteries (a third one was in Wola).

Aaron Lieberman (1845, Lunna – 1880, New York) – a well-known journalist and publisher. He studied the Torah in Vilna (Vilnius), worked as a melamed in Suwałki, and was an extra-mural student at St. Petersburg Institute of Technology. He published articles in the Forverts about the labor conditions of Jewish workers. In Vilnius, he became a socialist agitator, for which in 1875 he was forced to leave the country. In London, he set up the Hebrew Socialist Union, and in 1876, he started to publish a socialist magazine Ha-Emet (Heb.: Truth). In 1878, he was arrested in Berlin, but managed to emigrate to the USA in 1880.

The Wehrmacht troops captured Lunna on June 28, 1941. German soldiers started to pillage Jewish houses. Already on the first day, a few Jews were shot for their alleged contacts with the Soviet intelligence. In July 1941, the Germans organised a Judenrat (Jewish council) in Lunna, with Yakov Welbel as chairman. A Jewish police force was established to maintain order.

“ […] both younger sisters, Leja and Chaja, lived with their mother in Lunna. Father could take only one of them to Palestine. For this purpose, it was necessary to pay all the travel fees through a friend, so that he could go to Lunna, enter into a fictitious marriage with her, and thus obtain a permit for her to leave for Palestine, where a divorce was to be obtained later. Father decided that Leja would be the one to go. Leja arrived in Palestine at the last moment – on April 5, 1940. Her mother and sister Chaja stayed in Lunna and were killed during the Holocaust together with the town’s remaining 1,549 Jews.

In September 1941, before the feast of Sukkot, the occupying forces announced the establishment of a ghetto, and in October that year, they ordered the confiscation of all personal property and real estate of Lunna Jews. On the night of November 1–2, 1942, all the dwellers of the ghetto were deported to the transit camp in Kolbassino (near Grodno). On December 5, 1942, prisoners from the Kolbassino camp began to be transported by rail to the Auschwitz death camp, where 1,549 Jews from Lunna-Wola were murdered. Of the town’s entire Jewish population, only 15 people survived; one of them was Eliezer Eisenschmidt, who managed to escape during transport.

Zalman Gradowski, a former member of the Judenrat of Lunna, found himself in a special unit in Auschwitz that worked at the crematorium. He wrote down his experiences and buried his notes in the ashes near the crematorium. Gradowski was one of the leaders of the uprising of the camp’s prisoners on October 7, 1944 and was killed in a shooting. His notes were found and published in the collection entitled Megiles Aushwitz (Yid.: Scrolls from Auschwitz), ed. B. Mark, Tel Aviv 1977.

At the new Jewish cemetery on Sheremeta Street in Lunna, more than 300 19th- and 20th-century matzevot have survived. In 2005, a group of American students from Dartmouth College under Dr. Edward Boraz’s supervision carried out inventorying and restoration works at the cemetery. The site where the old cemetery used to be located, a few hundred metres away in Komsomolskaia Street, is currently a square with a memorial to the Holocaust victims, but a fragment of the wall and three matzevot have survived. The Jewish cemetery in Wola, with about 80 surviving tombstones, is located in the forest of Zalesie, 700 metres to the left off the Grodno–Vawkavysk road.

The building of Lunna’s main synagogue survived the war but was totally reconstructed in the times of the USSR; it served as a bakery and currently houses a community centre. The wooden synagogue in Wola was destroyed during World War II; no material trace of it remains.

The houses formerly inhabited by several Jewish families – the families of Kosowski, Berachowicz, Złotojabko, Win, Jedwab, Fejdman, Eliaszberg, and others – have been preserved. The gable walls of some houses bear brick ornaments in the shape of the Star of David.

A part of the exhibition in the school museum (10 Shkolna St.) tells the story of the local Jewish community. The exhibits include a preserved fragment of a Torah scroll as well as many photographs and documents.

Skidziel (18 km): a former yeshiva; the Chapel of the Assumption of the Blessed Virgin Mary (1870); the Antonowicz-Czetweryński manor park (circa 1840); the Orthodox Church of the Holy New Martyrs and Confessors of Belarus; a Jewish cemetery; a memorial to the victims of World War II.

Voupa (17 km): a former prayer house, cheder, and mikveh (early 20th c.); a memorial at the execution site at the Jewish cemetery; Church of St. John the Baptist (1773); Sts. Peter and Paul Orthodox Church (20th c.); a collection of Judaica in the school museum.

Kamianka (27 km): a Jewish cemetery, a few dozen matzevot; the Church of St. Anthony of Padua. 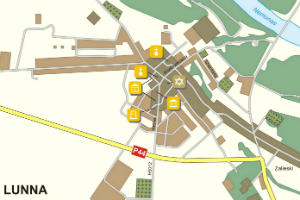