My "Days" in Slonim

J. Kugelmass, J. Boyarin, „From a ruined garden: The Memorial Books of Polish Jewry”, Bloomington 1998: "My "Days" in Slonim".

My home town of Rozhinoy boasted a yeshiva which was famed in all of the surrounding towns and cities. When I was twelve years old, I was already a student of the head of the yeshiva, Reb Itsele. He was the greatest scholar in town after the rabbi, Reb Shabse Volakh, who was considered to be one of the most brilliant men of his generation. (He was the uncle of the famous Communist leader and Soviet Foreign Minister Maksim Livinov, whose real name was Volakh.)

When I left the yeshiva, my father had to decide what to do with me. His heart wouldn’t permit him to apprentice me to an artisan, because he dreamed of my becoming a rabbi. On the other hand, it was impossible for him to let me stay in the house doing nothing and eating for free. His meager weaver’s wages didn’t even suffice for the upkeep of his second wife, my stepmother, and the child they had. He decided to send me to study at the famous Slonim yeshiva. My father had a cousin there with whom I could stay. Immediately after Sukkes, he packed a few shirts and several freshly washed pairs of legging into a bundle (I never wore those socks during my childhood), hired a carriage, and set off for Slonim with me.

My father’s cousin lived in an alcove in the home of a certain Shmuel Stolyer, the cabinetmaker, on the artisans’ street. Her husband was in America, and she had remained in Slonim with two-year-old daughter. Shmuel Stolyer was a short, wizened little man, with many wrinklers in his face, and strict, angry eyes. He was always shouting at someone: either at his wife, or at his workers, or at neighbors in the street. In Slonim he was known by the nickname Shmuel Khemele’s, or Khemele Crazyman. When he overheard someone referring to him as “Khemele”, he used to grow bitterly angry.

My father was unaware that Khemele was Shmuel’s nickname. Plodding through the deep mud of artisans’ street and holding me by the hand, he began asking people where Shmuel Khemele’s lived. Who did he happen to ask, but Shmuel Khemele’s himself! The latter shot him an angry look, and shouted, “Reb Jew, find out who you’re looking for before you make your inquiries!” and he began to run away as though someone were shooting at him. After running a short way, however, he turned his face toward my father and shouted angrily: “Over there, that’s his house.”

My father’s cousin inhabited a small, narrow alcove. One bed stood there, in which the cousin, a very fat woman, slept together with her young daughter. I would have to sleep head-to-toe in the same bed.

My father left me with his cousin, depending on her to find “eating days” for me. When we parted, he gave me an entire “quarter”(twenty-five kopeks), kissed me, and told me to be a good boy and study with fervor.

Owing to the fact that my father had so innocently called my cousin’s landlord “Khemele”, I got nothing but trouble from him. He constantly drove me out of his yard, and I was confined to my cousin’s alcove like a prisoner.

His furniture workshop was at his house. The beautifully turned knobs, and carvings of various animals and birds, such as lions and eagles, on the furniture – on beds, chairs, cupboards, and sideboards – teased and enticed me, and the smell of fresh-planted wood shavings and the turpentine with which the furniture was polished wafted to my nostrils with such a sweetness that I would have given a lot just to spend a few minutes in the furniture workshop. But it was impossible for me, because Shmuel Khemele’s wouldn’t let me in.

His only worker, the apprentice Idl, was a short lad with black eyes and hair, and with an open, cheerful face. He sympathized with my wish to spend some time in the workshop, and once he whispered in my ear utmost secrecy that Master Shmuel would be away that night. He had gone to a wedding with his wife. If I came into the workshop late at night, when it was dark there, I could lay down to sleep next to him on the wood shavings.

With my heart pounding, I waited for evening, when it would grow dark in the workshop. Then with quiet steps I slipped into the workshop and lay down next to Idl on the mountain of freshly planed shavings. I felt exalted and happy, as though my greatest wish had been fulfilled. Yet I couldn’t fall asleep, for fear that the boss could catch me. I lay next to Idl for a few hours, and then with soft, barefoot steps, in order not to wake him, I slipped back out of the furniture workshop and returned to my cousin’s alcove.

My father had asked my cousin to arrange eating days for me. However, she couldn’t find more than four “days” per week for me, and even there were with poor families. (She fed me herself the other three days.) One of four days, the Sabbath meal, wasn’t bad at all, but the other three I was hungry.

Mondays I would eat at a shoemaker’s house. When I arrived the first time, he was beating his wife with a broad, leather shoemaker’s strap. She wept and cried out, but he cut her like cabbage.

I stood embarrassed, with my eyes to the ground, and finally left the house hungry, never to return. I had lost my Mondays. From then on, I got by on Monday with the bit of thin soup distributed at the yeshiva.

Tuesdays I ate at the home of a poor widow with four children. Apparently she was very pious, and poor as she was, she had a yeshiva student one day a week in order to earn merit in the World to Come. But she was always bitter and depressed, and very dirty. The house was never clean, the beds never made. She went barefoot, her feet black from dirt, in a dirty petticoat and a jacket whose color was impossible to discern. Her hair was disheveled. She sighed constantly, and never said a friendly word to me. She used to set a plate of groats and a piece of bread on the dirty table with a sigh, and go off into another room.

My third day was at the home of a poor storekeeper. He had a small grocery in the front of his little house, and both man and wife were constantly busy in the store. I wasn’t fed there; they took care of me by giving me three kopeks. I used to buy a portion of chick-peas from the woman who sold them at the yeshiva, and that would have to last me through the day.

However, my fourth day, the Sabbath, was good. On the Sabbath I went to a tinsmith. He was a tall, handsome, cheerful Jew with a blond beard. He wasn’t very bright, though, and was henpecked by his young wife. She was very pious, and considered it a great mitsve to feed a yeshiva boy one day each week. Indeed, she took care of me: in the course of the three Sabbath meals, she stuffed as much food into me as I could hold. She would put another piece of fish, of meat, or of kugel onto my plate, and say with pious goodness: “Eat, eat, it will give you strength to learn.”

The people of Slonim had a special dish called a gutman. (This is a sort of pudding of buckwheat meal, sautéed with fried onions and rose oil.) It became a strictly observed custom for my young hostess to bake me a small gutman every Sabbath. After services on Saturday morning, before serving the cholent, she used to bring out the nicely browned gutman she had made just for me. Her face shone as I sat eating it.

The tinsmith was extremely fond of gutman; as I sat eating mine, he used to look at me with greedy eyes, and saliva ran from his mouth.  But he didn’t dare touch it for fear of his wife. Just once, when we sat at the table humming a melody, he stole a glance at his wife, and thinking that she wasn’t looking, he stretched his hand to my plate for a piece of gutman. She immediately noticed this, and struck his hand with the spoon she was holding, shouting:

“Where are you sticking your hand, you? My big scholar! Don’t you know that gutman is for the yeshiva boy? Do you sit studying like he does?”

And she glanced at me piously.

I felt sorry for the tinsmith. His eyes, greedy for a piece of the gutman, haunted me, and I didn’t enjoy eating. Nevertheless, the Sabbath was my best day. Just that one day in the week, I ate my fill.

I studied at Slonim for two semesters. Then I was told I was competent to study on my own, without attending the yeshiva. So I left Slonim, and returned to my hometown. 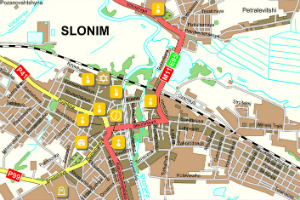