The wooden synagogue near the marketplace, the hearth and heart of the Jewish community. […] The centre of worship and study […], it was literally never closed. The first written mention of Astryna dates to the 1450 inscription in The Lithuanian Metrica. In the 15th–16th century, Astryna was under the king’s rule and was the centre of a gmina in the County of Troki (Trakai). In 1520, King Sigismund I the Old, who owed one A.I. Chreptowicz “500 times three score groszy,” gave him “his manor of Astryna, to pay the amount back, for three years and then until his death.” In 1641, Władysław IV granted the town Magdeburg rights and a coat of arms.

In the 16th century, Tatars settled in the vicinity of Astryna for the first time. This was connected with King Sigismund I’s gift of land to Aziubek-Soltan, the khan’s son. Having received land near Astryna, Aziubek started the princely family of Ostryński – the most influential Tatar noble family in the Grand Duchy of Lithuania. The Tatar prince’s descendants held important offices at the ducal court, had the right to maintain their own armed troops, and were directly subordinate to the Grand Duke.

In 1795, Astryna was incorporated into the Russian Empire and was leased out on a long-term basis to the Governor of Kherson.

In 1885, Astryna was home to 1,210 people living in 295 houses. The town had a municipal office, an Orthodox church, a chapel, two Jewish prayer houses, a school, 10 market stalls, a brewery, a water mill, and a tannery. A market fair was held every Sunday.

The earliest mentions of Astryna’s Jews date back to 1569, when the local community was subordinated to the Grodno kahal. In 1765, there were 436 registered poll tax payers in Astryna and the surrounding area. In 1897, there were already 1,440 Jews living here, making up 59 percent of the population.

At the beginning of the 20th century, two synagogues were built in Astryna: the “cold” (functioning from Passover through the High Holidays) and the “warm” (functioning from the High Holidays through Passover); they were erected in place of the previous synagogues, which had burnt down. A bathhouse was also built at that time. All these buildings have survived to the present day.

Harry Austryn Wolfson (1887–1974) was a scholar, philosopher, and historian born in Astryna, a Harvard University professor, the first chairman of the Judaic Studies Center in the United States.

In his thirst for learning Wolfson resembled a Jewish gaon: he would spend days and nights over books, resisting the temptations and distractions that could entice him away from study. He published his first work when he was still a student. This is what Astryna looked like in the future scholar’s eyes:

Ostrin is a small town, surrounded by thick forest. In its center is a wide, sandy marketplace which contains the town well. On one side of the marketplace stands the white church building encircled by a stone fence; on the other side stands the black, wooden synagogue with its trebled roof, which is never closed. A number of narrow, unpaved streets, commencing at the marketplace, run in curved lines for about half a mile on each side. The houses around the market and those near it are inhabited by Jews, who are the merchants, the mechanics, and the professional men of the community. These are hewed log houses built at a distance of some yards from each other. Their roofs are shingled, their windows high, and in some cases the frames painted red and white. At the extremities of each street the moujiks live in their humble thatched dwelling places, each of them having in its front a well, a pen, some trees, and a dog lying in wait.

According to data from 1919, Astryna (then Ostryna) had 1,841 residents, 1,067 of whom were Jewish. From 1921, the town functioned as the centre of a municipality (gmina) in Lida County, and from 1926 – in the Shchuchyn County of Nowogródek Voivodeship (Palatinate) in the Second Polish Republic. There was a TSYSHO school there, influenced by the Bund and with Yiddish as the language of instruction, and a Tarbut school, run by Zionists, with the instruction in Hebrew. Towards the end of the 1920s, a Hakhshara, a special training program for the Jewish youth, was launched in the local forest, preparing young people for emigration and settlement in Palestine.

The maggid was a multi-faceted preacher who delivered colourful sermons on a variety of ethical themes, using a combination of stories and parables to give either harsh rebuke or gentle persuasion. From time to time, such preachers came to the village. As soon as one arrived, he would hang a notice on the door to the synagogue informing the public as to when he would speak and his subject. By the time the sermon began, the synagogue would be filled to capacity, standing room only. Each maggid had his own signature melody by which he preached. The sermon would be generously peppered with verses from the Torah, the Talmud, and the great classic Jewish sages, heavily dosed with humorous anecdotes. When the preacher described the waiting terrors of Gehinnom (the place of punishment in the afterlife), the audience could feel its feet burning and smell their singed beards. When he spoke of Gan eden (the place of reward in the afterlife), his listeners thought they could feel the bliss and taste the ecstasy awaiting each upright and righteous Jew “after a hundred and twenty years”. All the men would nod their heads sagely as they followed the message of the maggid while the women in their separate gallery wept with excitement. Laborers who had worked hard all day fell asleep with expressions of nakhas (satisfaction) on their slumbering faces, their tired heads leaning on the wooden shtenders (high tables for prayer books or the Talmudic tractate). Every sermon was based on the weekly Torah portion and incorporated practical moral lessons applicable to the people’s daily lives. Among the maggidim were some real “fire and brimstone” preachers whose sermons were a lively topic of conversation even after the preachers had long left the village to move on to their next appointment. Collectors visited each home in the village the next day in order to collect donations for the maggid who had spoken the previous night.

The Soviet invasion of Poland in September 1939 put Astryna within the borders of the USSR. The activity of Jewish religious and secular organisations was banned. In 1940, Jews made up 73 percent of the town’s population. In addition, about 500 Jews lived in the village of Novy Dvor, 10 km to the northeast. At the beginning of World War II, eight refugee families from Warsaw and Łódź had arrived in the town, but after the Soviet rule was established, they were deported to Kazakhstan.

German forces seized Astryna on June 24, 1941; the Jewish population faced repression: contacts with the local community were prohibited, forced labour was introduced, and Jews were compelled to wear yellow armbands. Eyewitness accounts reveal that the first mass killing of Jews in Astryna took place in the second week of German occupation.

A resident of the town, Mordechai Cyrulnicki, who managed to survive the Auschwitz-Birkenau camp, recollected:

Executions by shooting became frequent and normal in our little town. They took place on the market days, in order to frighten the peasants living in the surrounding area. The commander, who lived in the regional centre, Shchuchyn, often came to Astryna, and then we knew that people would be shot.

The ghetto in Astryna was established in October 1941. According to different estimates, between 1,200 and 2,000 inmates were confined there.

In early December 1941, Jews from all the nearby villages, as well as from Novy Dvor and Dąbrowa were rounded up in our town. They said that all the weak and ill ones had been killed on the way. During the establishment of the ghetto, 10 more people were shot. Further orders followed, and there were further executions. Leib Mikhelevich and his sister Feige-Sore were shot for secretly bringing some grain to the ghetto. Osher Bojarski was caught grinding grain – and he was shot, too.

The liquidation of the ghetto began on June 6, 1942. At the end of October 1942, the Jews from the ghetto in Astryna were transported to the Kolbassino camp, 5 km from Grodno, which was the transit point for the Jewish population on the way to Auschwitz and Treblinka. The few survivors (Vladimir Glembocki, Shlomo Bojarski, Mordechai Cyrulnicki) were liberated by the Red Army in 1945.

I was born in 1899 in the town of Astryna, currently the Grodno Region. I lived there with my family until the Nazi invasion. I had a large family: 5 children. I had wonderful children. All of them were students. With the arrival of Soviet rule, the elder daughter, Gala – she would have been 22 now – was admitted to the Grodno secondary school of engineering and construction and got promoted to the second grade in the spring of 1941. My eldest boy, 17-year-old Yakov, attended a factory-based printing vocational school. The others were still in school: 16-year-old Joel was promoted to the 9th grade, 13-year-old Wiktor – to the 8th grade, and the youngest girl, Łania – only 9 years old – would have been in the 4th grade.

Novy Dvor (10 km): a masonry former synagogue (early 20th c.); the Church of the Assumption of the Blessed Virgin Mary; a Jewish cemetery.

Shchuchyn (23 km): the Drucki-Lubecki palace complex (late 19th c.); the building of the former prayer house and yeshiva, currently shops; a Jewish cemetery with about 40 matzevot; a monument at the mass grave of Holocaust victims; Church of St. Theresa (1828); a Piarist monastery; St. Michael the Archangel Orthodox Church (1865); ruins of a cemetery chapel.

Vasilishki (23 km): a former synagogue, currently a community centre (early 20th c.); former Jewish houses; Church of St. John the Baptist (18th c.); in the nearby village of Staryya Vasilishki there is the house of the Wydrzycki family, in which Czesław Niemen was born. 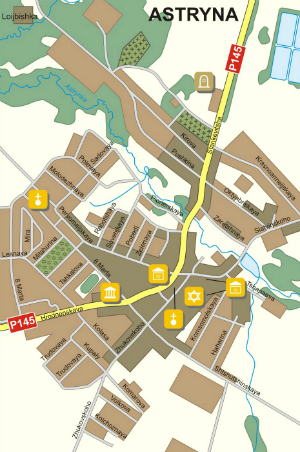