From Jewish Majses. Stories from Józefów Biłgorajski based on the Yizkor-Buch – a commemoration book of Józefów Jews. Shortened, improved and commented by Yaron Karol Becker.

Reading about a miraculous healing of the sightless woman from Tomaszów Lubelski, I unconsciously asked myself: what have caused it? A will of God? Fetish of the red handkerchief? A big heart of our shammash? I am acutely aware that by broaching up this issue I perform a kind of dissection foreign to history of humanity. Yet, I couldn’t help it. That story managed to tug at the heartstring of the doubting Thomas I am, having shaken my adamantly ironical and rational attitude towards such things. I must confess that somewhere deep down I even started to believe, that a good heart as Berele’s – one may rarely encounter in our world – had indeed a magical power and was able to perform wonders. At any rate, before I give you and myself an answer to the question, that probably doesn’t have an unambiguous response, moreover, doesn’t require one, I have to tell you about other wonders of Reb Berele. Mind you, it was the wisest Rabbi from Radzyń, who affirmed their verity.

Rabbi from Radzyń arrived in Józefów not without a reason. He intended to print his new work, dedicated to Halahah (the so called Judaism law), in the local printing house. Rabbi had spent in Józefów many days, when out of the blue… Engrossed in correcting and rubbing off the mistakes, he suddenly heard something that made him become all ears. It was almost midnight, the time for Tikkun Chacot prayer1 , when rabbi heard Nigun2 . The melody was ringing in his ears so seductively, that rabbi couldn’t resist it any longer. He put aside all his papers and notes, flung on a cloak over his shoulders and a cap and rushed outside led by the captivating sounds.

Here, notwithstanding the fact, that rabbi was in an extreme hurry, we would slow down the pace of our narration a bit for the sake of one seemingly small, but as a matter of fact very significant detail. We are talking about the cap that set askew on rabbi’s head because he had previously been in such haste. Rabbi was holding on to it with his one arm, preventing it, God forbid, from flying off. Through that cap he basically expressed his individuality. In theory, fashion of those times dictated its own rules according to which a hat was the most conventional headwear for rabbis, with an exception on holidays, when they put on fox or sable fur hats called “streimel”. The difference in clothing, often entirely non-eye-catching, may be helpful in distinguishing one Hasidic movement from the other. Sometimes, it lies in different colour or cut of the clock. In modern Israel, for instance, various kinds of kippahs are serving as identifiers: white with pompoms, embroidered, black and hip skull-caps of psychedelic colours. They immediately reveal what religious movement we are dealing with. Rabbi from Radzyń when asked about his peculiar preferences in headwear, replied that peak of a cap required special attention, because it had to sit perfectly level on the head, otherwise you would have the air of a coachman. Apparently, such pedantry was right up his street. Be that as it may, we saw him running faster and faster in the cloak gaped open and his cap cocked in search of the unknown ruthful melody.

Upon reaching the man, who was playing Nigun, rabbi all of a sudden got off the ground and levitated after him. The man playing Nigun, clearly was our close acquaintance Berele. Rabbi tried to be very careful not to scare shammash, who was levitating during his morning round. You may imagine Berele’s astonishment when having approached the last house he fell on the ground landing into rabbi’s arms. “Oh, rabbi from Radzyń…” – he muttered caught by surprise. Deeply touched rabbi cried in response: “It is not true! I am your shammash, your servant, the captive of your Nigun, the melody that have been heard and remembered by all souls on mount Sinai. You are my rabbi, a secret rabbi, Lamed-Waw-nik – one of thirty six righteous Jews through whose piety the world exists”. Having uttered those words, rabbi dashed towards Berele to hug him and express his admiration and affection. Shammash, seized with terror and anxiety, was shaking like a leaf. “Rebe, let me be. I want to be alone!” – shammash begged the rabbi like a lost child, next turned his back on him and ran in the direction of his Bet Ha-Midrash. 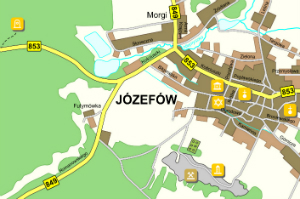