Radun was a quiet shtetl with low houses. Their straw roofs were blackened with mould, and tiny windows were often skewed to one side because of age. 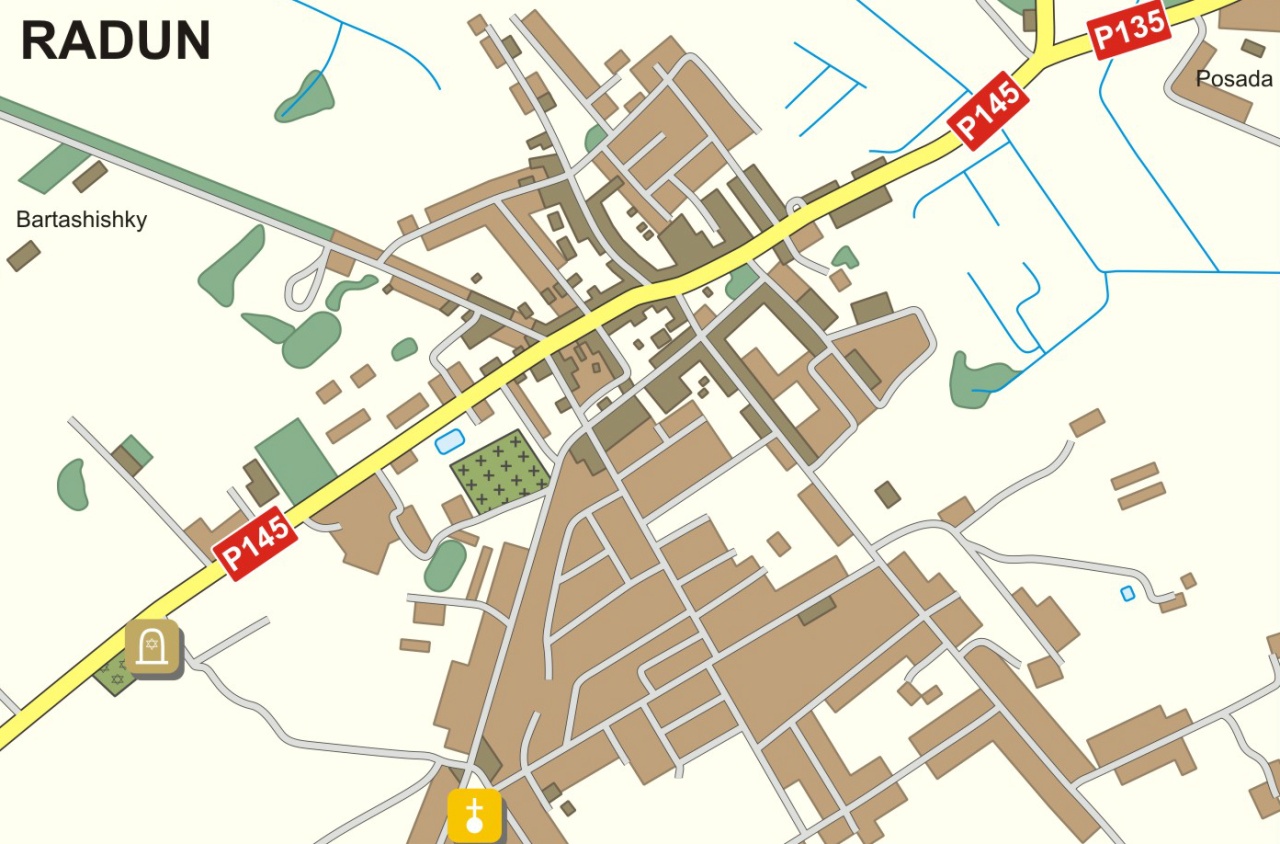 Radun was first mentioned in the 1217 Monumenta Germaniae Historica chronicle. In 1387, Władysław Jagiełło (Jogaila), Polish King and Grand Duke of Lithuania granted “the settlement of Radun and the entire estate, together with all the servants, people, villages and livestock,” to Skirgaila Alexandrovich, as can be read in a document issued to Alexandrovich. According to the census of 1538, Radun consisted of seven streets leading to the marketplace, 210 Christian houses, 35 beer stores, one vodka store, and seven shops selling mead. Jews were not allowed to settle there. The town was granted Magdeburg rights in 1649, and in 1795, Radun became part of the Russian Empire.

The Jews of Radun

Because of its status De non tolerandi Judeos, forbidding Jews to settle within the town walls, Jews could not settle in Radun until 1679, when John III Sobieski granted them with the privilege of permanently residing in town. In 1765, the Jewish community of Radun and its vicinity had 581 people. Over five–six centuries, Jews were either allowed or forbidden to settle in Radun, but they always returned. They built a synagogue, sent their children to a cheder, earned their living from trade, lease-holdings, and crafts, and engaged in charity. In 1866, Radun had 101 houses inhabited by 869 people (361 Catholics and 508 Jews), a wooden parish church, a synagogue, a state school, and a municipal office. In 1885, there was a tannery, a brewery, 14 stores, three inns, and four smithies in the town. Market fairs were held every Thursday.

As there was no river near Radun, the only source of water was a communal well located on a small municipal square. As the place to get fresh water, it also served in summer as a busy meeting point for Jewish women, whose children would splash around at the well, and for the peasants who pulled up there and, having left their carts, went shopping in the Jewish stores. In spring and autumn Radun was full of mud, as none of its streets was paved.

The town boasted a yeshiva, founded in the 19th century and then rebuilt in the early 20th century. The tall white building with large windows and spacious bright rooms attracted hundreds of Jews from all over Europe. These yeshiva students added colour to the routine and, at times, quite monotonous life of the shtetl and constituted another source of income for the town’s inhabitants.

The Hafetz Haim and the Radun yeshiva

The fame of the Radun yeshivah was probably exceeded only by that of its founder – the prominent Talmudic scholar and the paramount rabbinic authority Israel Meir ha-Kohen Poupko (1838–1933), known as the Hafetz Haim of Radun. The name under which he is known throughout the Jewish world today came from the title of his first book, published anonymously in Vilna (Vilnius) in 1873 and focused on the laws of lashon ha-ra (evil talk, gossiping). Its title, Hafetz Haim (Heb.: Desire Life), comes from Psalms 34:14–15: “Who is the man that desireth life, and loveth days, that he may see good therein? Keep thy tongue from evil, and thy lips from speaking guile.” Thus the book outlined most important legal rulings (hilkhot) from biblical and rabbinic sources and various Jewish practices that targeted ethical aspects of gossiping and evil talk. The popularity of the book – as it often happens in Judaic tradition – made people refer to its author with the name of his book.

Israel Meir Poupko was a son of Arie Zeev, a pious Jew and a graduate of the Volozhin yeshiva. Israel Meir’s love for learning was fostered by his father, who took him to Vilna (Vilnius), then the center of Ashkenazic Judaim, where he met with the local Torah scholars. Even as a little boy, Israel Meir amazed everyone with his remarkable memory. After he married Frida ha-Levi Epstein, he moved to Radun, where he continued the study of rabbinic tradition, spending days and nights at the local beth midrash. In 1869, he established a yeshiva of his own, known as the Hafetz Haim. Rabbi Israel Meir refused to accept a salary for serving as rabbi and subsisted on the money that his wife earned running a store. He always taught his students not to study too much at the expense of their health and made sure that none of them went hungry. The custom of different families providing meals for students, called esn tog (Yid.: eating days), was simplified at the Radun Yeshiva. To spare students the embarrassment of asking for food and to avoid distracting them from their classes, Radun’s residents delivered food directly to the yeshiva. If some student happened to be left without lunch, the yeshiva head himself brought in a hot lunch for him. Later, kitchens were built, and Hafetz Haim’s daughters – Reizel, Faiga and Sara themselves cooked and served the food.

At the outbreak of World War I, in order to save his students, Hafetz Haim left the yeshiva and travelled with them to the town of Smilavichy near Minsk, where they found temporary refuge. When the Bolsheviks came to power, Hafetz Haim allowed the Jews to flee Radun even if it violated the Sabbath, because he believed that their lives were in danger.

Israel Meir was a founder and spiritual leader of the Agudath Israel Orthodox movement, and he opened the First General Convention of the Agudath Israel. In 1924, he initiated the establishment of Vaad ha-Yeshivot – the Central Committee managing the affairs of Eastern Europe’s yeshivot. He had foreseen the extermination of the Jewish population in Europe and the establishment of a Jewish state.

Hafetz Haim devoted more than 65 years of his long life (he died in Radun in 1933) to his yeshiva and left an indelible mark on Jewish religious thought. Elhanan Waserman (head of the Baranovichi yeshiva) made the following comment on the modestly of Hafetz Haim’s life: “If he wants to hide from us with his brilliant mind, we will, with our small minds, find him.”

Hafetz Haim authored many works on moral, ethical, and halakhic issues. These include: Shmirat Lashon (Heb.: Guarding One’s Tongue, 1876), Ahavat Hesed (Heb.: Introduction to Charity, 1888) devoted to the sin of slander, and Mahaneh Israel (Heb.: The Camp of the sons of Israel, 1881) about the way halakhic rules should be observed by tsarist army soldiers of Jewish origin. His Mishnah Berurah (1894–1907) – a detailed commentary on the Orach Haim (asection of the Shulchan Aruch Code devoted to everyday Jewish life) has been accepted as one of the main sources of the Halakhah for many decades by the entire Ashkenaic Jewry.

The Hafetz Haim yeshivot founded later on by Israel Meir’s followers in New York and Israel breathed a new life into the Lithuanian traditions of Jewish religious and academic life.

In the nineteenth-century shtetl, reverence and concern for the head, for the intellect – far more than the cultivation of the body – was where these Jews’ emphasis lay. Although few in the community were rich or knowledgeable enough to engage in full-time study, most people looked up to these sheyne Yidn, these Jewish “beautiful people.” With that ideal squarely in mind, parents hoped to raise their sons to be scholars, to work with their minds and not with their muscles, even if most fathers were butchers, bakers, porters, coachmen, and so on. […] Rather, the superstars of the Jewish town were the sedentary types who stuck to their books. Of course, in keeping with Jewish tradition, even the most committed students participated in outdoor games on Lag B’Omer – the Jewish field day. But there was no social sanction for daily and violent pastimes – fighting [was] ‘un-Jewish’ in the extreme.

Interestingly enough, when ruminating about how he was raised and educated, Rabbi Hafetz Haim publicly regretted that he had not devoted enough time in his youth to physical fitness. A sounder body, in his view, would have helped him become an even greater scholar. Addressing his disciples during a lecture at the Radun yeshiva, he said: “Do not study too much. Man must preserve the body so that it does not grow weaker or fall ill, and for that it is crucial to rest and relax, to breathe fresh air. One should go for a walk in the evening, or rest at home. If possible, one may have a swim in the river, for this, too, is an excellent way of strengthening the body.” Despite Hafetz Haim’s reputation and prestige, his remarks did not inspire yeshiva students to start a physical training movement. On the contrary: the prevailing opinion was that physical activities were a loss of valuable time that should be spent on Torah study.

Before World War II, there were about 800 Jews in Radun. In September 1939, Radun was incorporated into the Belorussian Soviet Socialist Republic, and on July 1, 1941, it was captured by the Wehrmacht troops. In November 1941, the Germans rounded up the Jews from nearby villages and secluded them in the Radun ghetto (1,834 people in total).

On May 11, 1942, during the liquidation of the ghetto, the Nazis and their local accomplices executed 1,137 people. During another liquidation operation, carried out in the field 100 metres west of Radun, about 180 people fled, but 20 of them were shot to death.

[...] Mother was devoted to the Jewish faith with all her soul. My father did not protest. She brought us up in this faith. [...] I remember that when I came back home, she was sewing and singing beautifully. These were the songs about Eretz Israel [Hebr. The Land of Israel] and about the Jewish nation. They were all in Yiddish. Sad songs.

Avraham Aviel was born in 1929, in Dugalishok, a Jewish farming village on the outskirts of Radun. He managed to escape from the mass shooting in the Radun ghetto, where his mother and younger brother were killed. His father and older brother were shot later, when they were hiding from the Nazis in the nearby forests. Avraham joined the partisans and, together with other Jewish survivors, fought against the Nazis until 1944. After the war, Aviel settled in Israel. He wrote a book about the Jews in Belarus and was a witness at Adolf Eichmann’s trial in Jerusalem. The life of Aviel and his family as well as the fate of Belarusian Jews during the Holocaust are presented in a documentary ...But Who Could I Pray For? (Israel 2010) produced by Yad Vashem within “Witnesses and education” project.

After Radun was liberated in July 1944, 32 Jews returned to the town. In 1961, a sculpture of a soldier was put up on the grave of the executed ghetto prisoners, later replaced with a memorial to the Radun Jews (“To the Victims of the Holocaust”).

By the road to Novy Dvor, about a kilometer from the town, there is a Jewish cemetery. It covers an area of about 2.8 ha (six acres) and is fenced and well-maintained. Hafetz Haim’s ohel is there and has been renovated in recent years; there are also gravestones of the yeshiva’s teachers, a dozen old stone matzevot, and a contemporary gravestone from 2007. In the 1990s, a memorial was erected to the Jews of Radun killed in the mass executions during World War II.

The story of Radun’s Jews is shown at an exhibition in the school museum at the Radun middle school. The exhibition includes copies of the privileges granted by King John III Sobieski and Augustus III, Hafetz Haim’s works, and archival photographs.

Hajciunishki (57 km): considered to have been the prototype of the village of Soplicowo described in Adam Mickiewicz’s Pan Tadeusz; the fortified manor house of the Nonhart family (1613); the ruins of a Calvinist church (1633).