The Old Shul in Motele

In the town of Motele there is a synagogue about which tales of wonder are told. I have heard them myself from an old man who lived there. Listen now to what they say about that synagogue:

There was once a rabbi in the town who was a great genius and a saintly man, a tsadek, may his memory be blessed. Even the Gentiles greatly respected him.

One day it happened that the lord of nearby castle got sick (God keep us from the same) and the doctors despaired of his life. The nobleman decided to send a  servant to the holy man to ask him for a blessing. As it happened, the nobleman was actually a great anti-Semite but, because he was in such trouble, the rabbi was willing to give him a blessing.

And afterward the nobleman did indeed recover. Since the town of Motele did not have a synagogue, the lord had the idea of donating lumber to the Jewish community so it could build one. He gave the Jews twelve of the largest trees in his woods, and from those twelve trees they built a synagogue so large that today it holds a congregation of two hundred.

A considerable time has passed since its construction, but the synagogue still looks practically new. And to this day, when a misfortune (God forbid) happens in the town – when someone is sick for instance, or a disaster threatens the community, people gather to pray at the grave of the holy rabbi, may his memory be blessed. 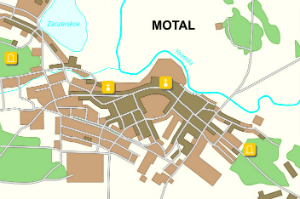