Zhaludok had three schools with instruction in Yiddish, Hebrew, and Polish, and two synagogues – the old and the new one. I remember Rabbi Sorochkin; there were branches of the Hechalutz and Beitar organisations.

Zhaludok is mentioned for the first time in the 1385 documents written by the spies of the Teutonic Order, who mentioned the settlement as a country estate of the Ściegiewiłłowicz family. From 1486, Zhaludok enjoyed the status of a town, and in 1512 it was included in the register of the Grand Duke’s mansions in the Lida County. In the mid-16th century, the town became the property of the Sapieha family of the wealthy Polish magnates. In 1680, the Zhaludok demesne – a large estate situated on both banks of the Neman River, which consisted of a manor house, the town, villages, arable lands, and forests – came under the rule of Kazimierz Frankiewicz-Radzimiński. In February 1706, Zhaludok served as the headquarters of the Swedish King Charles XII. At the beginning of the 18th century, the Zhaludok demesne passed to the Tyzenhauz family, who gave it its original urban design with the central elliptic square and six streets radiating from it. This design has been preserved till today. In 1835, Zhaludok became the property of the Uhruski family. The new owner’s son, Ludwik Świętopełk-Czetwertyński, built a palace near the town. Throughout the 19th and in the early 20th century, Zhaludok was the centre of a commune (gmina) in Lida County.

The Jewish community of Zhaludok emerged at the turn of the 17th and 18th centuries. According to the 18th-century poll-tax register, the Jewish community of Zhaludok numbered 287 tax-paying Jews, which means that the town was inhabited by around 600 Jews. In the 19th century, after the Russian authorities had implemented laws restricting Jewish residence in the countryside, the percentage of Jews in the population of Zhaludok increased significantly and ranged from 53 to 73.5 percent. The town’s commercial and industrial development relied on Jewish merchants and artisans. In 1830, Zhaludok had a population of 349 people, 17 brick and 24 wooden houses, two stores, and seven taverns.

In the second half of the 19th century and in the early 20th century, horse fairs were held in the town on Pentecost Sunday. This was also the time when match-making was arranged and students were recruited for various Talmudic academies.

In 1852–1853, guilds were established in nine towns of Lida County, including Zhaludok. They brought together 329 artisans of different trades. Zhaludok had 26 guild craftsmen, such as tailors, shoemakers, saddle-makers, glassmakers, painters, hatters, butchers, blacksmiths, and beekeepers.

At the turn of the 19th century, there were two synagogues in Zhaludok. In 1899, the Jewish community requested permission to build another one. In the petition, it was pointed out that there was one heated and one unheated synagogue in a town that had 200 Jewish households with 1,500 people of both sexes. In winter, the synagogue could not hold all those who wished to participate in the services. For this reason, the community requested permission to build “one more wooden shul, or, if the authorities find [a possibility to allow] a brick one, we agree, as we have enough funds to build a shul.” The petition included a design plan with both the existing and the planned buildings in Targowy Square. In his response to the Vilna province office, the Lida County head administrator wrote that the third prayer house was planned to be built on the plot of land where there already were two brick synagogues, but this was not possible because the plot was too small. The Board refused to enlarge it or find a different one. Nevertheless, the county head thought that the third prayer house was necessary because of overcrowding and poor sanitary conditions during religious services in the two existing shuls. Still, as is evident from the archival documents, the building was not established.

During World War I, in August 1914, 36 Jews (Zhaludok residents and Princess Czetwertyńska’s tenants) were called up into the Russian army. Their families, left without breadwinners, received financial aid. Some Zhaludok residents were evacuated to the Samara province.

In 1921–1939, Zhaludok was the centre of a township in Lida County, Nowogródek Voivodeship, in the newly independent Poland. According to the 1931 census, the town had 274 houses inhabited by 1,552 people: 1,053 Jews, 467 Catholics, 31 Orthodox Christians, and one Lutheran. In addition, the princely manor farm in Zhaludok included 14 houses and 242 people: 204 Roman Catholics, 21 Orthodox Christians, and 17 Jews.

Industrial establishments included a brickyard, a tannery, two distilleries, an open sand pit and gravel mine, a bakery, a small brewery, and a watermill. There were 10 stores trading in colonial goods, 10 groceries, one tobacco store, and three restaurants. Zhaludok also had three medical institutions (two medicine warehouses, a hospital, and a pharmacy) whose staff included one doctor, one dentist, and two medical assistants. Financial operations were handled by the community bank.

From Zhaludok out into the world

Zhaludok was the home town of several well-known intellectuals. One of them was Ben Avigdor (Abraham Leib Shalkovich), who was born in Zhaludok in 1867 and moved to Warsaw in 1891. He received a traditional Jewish education. A writer and publisher, he was one of the first to revive and popularise Hebrew literature in the spirit of critical realism. Avigdor’s stories and novels are among the first prose works in Hebrew to focus on the problems of individual characters rather than on the history and culture of the Jewish people in general. He died in Karlovy Vary in 1921.

Pinchas Kremień (Krémögne) was born in Zhaludok in 1890. Between 1908 and 1912, he studied at the Vilna Art School, where he made friends with Chaim Soutine and Michel Kikoine. In 1920, he illegally crossed the border, penniless, and then made his way through Germany to Paris. He met his old friends there and made new ones, such as Modigliani and Chagall. Kremień painted in the spirit of moderate Expressionism, mostly still lifes and landscapes. The best period of his painting career is considered to be between 1916 and 1920. During World War II, he was a hired worker in a village in southern France. His paintings were exhibited in Paris, London, Philadelphia, Lausanne, Geneva, Cannes, and Moscow. Kremień died in 1981 and was buried in Paris.

After the establishment of the Soviet rule in 1939, the synagogue in Zhaludok was converted into the Red Army House. In 1940, the Jewish population of Zhaludok stood at 70 percent (1,708 out of 2,436 inhabitants). Several refugee families from Łódź arrived here. In addition, more than 200 Jews lived in the village of Orla. A week before the outbreak of the war between Germany and the USSR, several traders, artisans, and representatives of the Jewish intelligentsia were arrested and sent to prison in Lida. Some managed to return to the town at the end of the first week of the war.

The Germans marched into Zhaludok on June 27, 1941, shooting six Jews denounced as communists in the first liquidation operation, and then establishing a ghetto on July 10, 1941.

The local authorities fled with the beginning of the German-Soviet war. During the week of anarchy that followed, until the Germans entered the town, village peasants pillaged Jewish houses, especially the ones where they encountered no resistance. The Germans burnt the town, leaving only the suburbs, where they established a ghetto. The Jews were crowded together, several families in one room. Some locals joined the police and cooperated with the new authorities; others were ready to help, but the majority remained indifferent.

On May 9, 1942, a general operation was carried out. All the people were herded into a ditch that had been dug outside the town. The Germans and policemen carried out the shooting. The only person who survived was a boy, Fishele Zborowski. He got out of the ditch and escaped but was caught by the Germans again. Our whole family, about 30 people, were killed in the pogrom – my mother and father, my sister Enia – a beautiful dancer, and others. My mother managed to save only Shloymele, hiding him in a furnace and covering it with bricks. At night, he managed to get out and ran away. After wandering around for a long time, he found several partisans and got himself admitted into a partisan unit. Shloymele, who was 19, often went on a reconnaissance missions; he was brave and always wanted to be in the forefront. In the last clash, he was mortally wounded.

I survived only because at the time of the execution I was working in a neighbouring village, from where I was transferred to Lida. The partisans had already been there then. One night, a liaison came to take a surgeon from the ghetto to the forest. On October 15, 1942, together with him and a few other companions, we escaped from the ghetto, taking with us some faulty weapons. The partisans treated Jews in different ways. Some showed sympathy, but others did not conceal their hostility. I served in a partisan unit on equal terms with the rest, I carried out tasks, lay in ambush, and kept guard. Boruch Levin escaped together with me. The police had sought him, so he had to hide all the time until he escaped to the forest. In the unit, Boruch became something of a legend; he derailed 18 trains and was put forward for the title of a Hero of the Soviet Union, but he did not receive it. After the war, Boruch Levin went to Palestine and lived there until 1981. He died at the age of 70.

Zhaludok was liberated by Soviet troops in July 1944, but none of the surviving Jews returned to the town.

In 1959, an obelisk was erected at the site of the execution of Zhaludok’s Jews (one km east of the town, 300 metres from the Jewish cemetery). In 2002, a memorial plaque was placed on the obelisk with an inscription in Russian, English, and Hebrew, reading: “Here lie buried more than 2,000 innocent Jews of Zhaludok and Orla, barbarously murdered by the German fascists and their collaborators on May 9, 1942. May the memory of the fallen be eternal.”

In 2012, the Moscow-based “Sefer” Centre for University Teaching of Jewish Civilisation, in cooperation with the University of Grodno, organised a summer school in Zhaludok. Its participants made an inventory of the Jewish cemetery and conducted interviews with those residents who still remembered their Jewish neighbours. The result of the project was an online publication Zheludok. Pamiat’ o evreiskom mestechke (Rus.: Zheludok. The Shtetl of Zheludok in Contemporary Cultural Memory, Moscow 2013), which is available at: http://sefer.ru/Zheludok_sbornik.pdf

The publication presents inscriptions from all the matzevot found at the Jewish cemetery (about 500, the oldest ones dating back to the early 19th century). Commemorative plaques were placed on the former synagogue and mikveh. Also the traditional buildings on Orlańska St., once inhabited almost exclusively by Jews, have survived to this day.

The Struve Geodetic Arc, included in the UNESCO World Heritage List, is located on the way from the train station in Razhanka, close to the village of Lopaty (8 km).

Murovanka (15 km): the fortified Orthodox Church of the Nativity of the Blessed Virgin Mary – one of the most precious monuments of Belarus (16th c.). 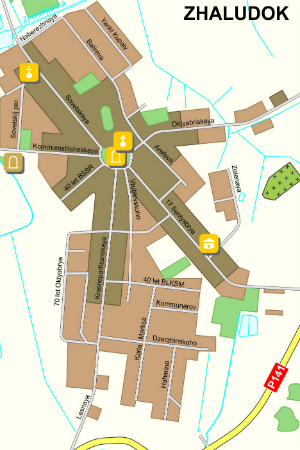